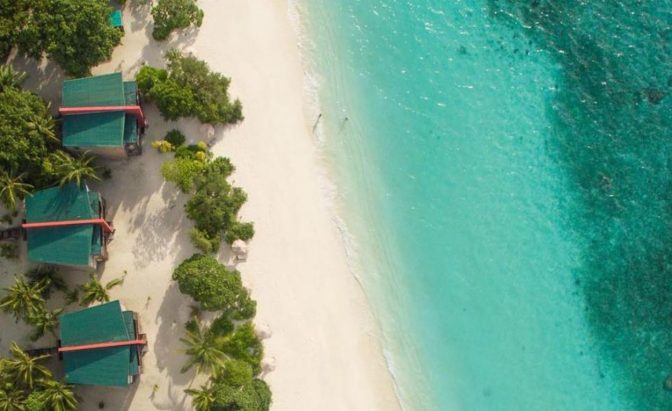 Places to visit in Thiladhunmathi

Thiladhunmathi is the northernmost atoll of Maldives, closest to Sri Lanka and India. Thiladhunmathi was divided into its northern and southern divisions on May 21, 1958. The north division was integrated with Ihavandhippolhu, forming a new atoll for administrative purposes called Haa Alif atoll or Thiladhumathi North. The southern section of Thiladhunmathi Atoll includes the island of Makunudhoo or Maamakunudhoo (Malcolm Atoll in the Admiralty Charts) with its large reef, as well as the southern part of the larger Thiladhunmathi or Tiladummati Atoll.

Thiladhunmathi is considered one of the least explored areas in Maldives by tourists due to the distance from Velanaa International Airport and lack of tourism infrastructures. Currently, there are only three operating resorts in the Thiladhunmathi, which are JA Manafaru Maldives, Hideaway Beach Resort & Spa in Haa Alif Atoll and Hondaafushi Island Resort Maldives in Haa Dhaalu Atoll.  There are about 10 guest houses and one tourist hotel available in Thiladhunmathi for its visitors. Hanimaadhoo international Airport is the only operating airport in Thiladhunmathi. The second airport in Kulhuduffushi island is scheduled to be opened in August 2019.

Thiladhunmathi is one of the most beautiful atolls of Maldives. Unique natural islands with lush vegetation, long beaches and turquoise lagoons yet to be explored fully. It’s a perfect adventure holiday and getaway destination, with the added benefits of getting to enjoy true Maldivian hospitality. Apart from natural beauty, the islands of Thiladhunmathi are blessed with a rich culture and heritage. A holiday in the Thiladhunmathi is a chance to gain an insight into this unique country, by exploring island villages, sourcing local handicrafts, visiting heritage sites, tasting local cuisine, and watching cultural performances.

Located on the east side of Thiladhummathi Atoll, Utheemu is famous in the Maldives due to the cultural relevance and the rich history of the island. Renowned as the birthplace of Sultan Mohamed Thakurufaanu, who, with his brothers and his companions, fought an eight-year-long war to drive out Portuguese invaders who had occupied the Maldives from 1558 to 1573.

“Utheemu Ganduvaru” is one of the main attractions and a must-visit for any visitor to the island. Utheemu Ganduvaru is the wooden palace in which Sultan Mohamed Thakurufaanu lived and grew up. It is well preserved and evokes memories of the early days of Maldives and the lifestyles of the ruling class from centuries ago, more than any other existing building in the country. Other attractions include the ancient cemetery, the Old Mosque, the New Mosque, and the beautiful stretch of beach on the north side of the island.

Kelaa Island is located in Thiladhummathi Atoll, just 30 minutes away from Hanimaadhoo International Airport by speedboat. Kelaa Island is large compared to other Maldivian islands, 3 km in length and over 1600 residents living in the island. Only one third of the island is inhabited, which makes the rest of the island an amazing set up for those who enjoy seeking out their own adventures.

From historical archives, it is known that in 1934 the British created an outpost in the island and it functioned until the end of the Second World War, as an analog of RAF Gan in the south of the country.

A mosque built during the reign of Sultan Mohamed Ibn Ali (Muhammad Mohyeddine) (AD 1692-1701) of the Utheemu Dynasty still stands today as a historical place of interest on the island. This was the king who re-established the Islamic penal code in the Maldives.

Hanimaadhoo island is located on the eastern edge of the Thiladhummathi Atoll. The island is among one of the longest islands in the Maldives with 6.8 km in the length and 0.7 km at the widest point. Hanimaadhoo boasts scenic views of some of the country’s most spectacular beaches, complemented with its large and shallow turquoise lagoon surrounding the island. The island has its own international airport and several accommodation options available for visitors. The world-class Maldives Climate Observatory – Hanimaadhoo is also located on the island.

Uligamu is the most northern inhabited island in the Maldives, located at the north end of Thiladhunmathi atoll. The island is unique in its formation with a beautiful white sandy beach and lagoon around the island. Due to the unique strategic location of the island, Uligamu has become a popular stopover for yachts en route from Sri Lanka to the Red Sea. There are a school and a hospital on the island also. Local residents live by fishing and farming, although many are already working in the tourism industry.