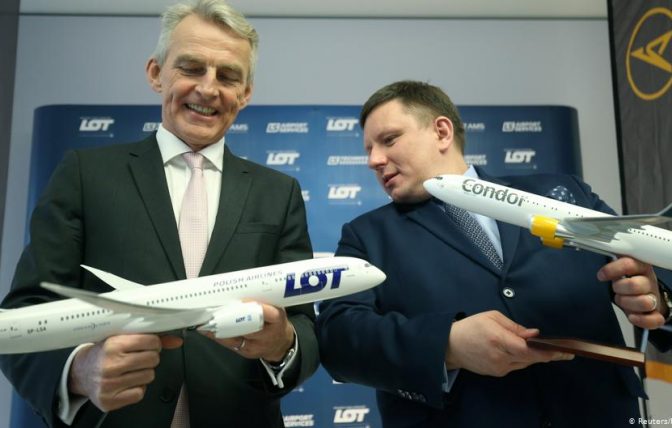 The UK government refused to rescue Thomas Cook when it went into liquidation last year, but German authorities approved a six-month bridging loan worth €380m for Condor, arguing that the airline was viable, and giving it a chance to find a buyer.

The deal, which is subject to antitrust approval, would create an airline with about 20m customers, 140 aircraft, and Germany and Poland as its main markets. Condor will continue to fly under its current brand and management.

Terms were not disclosed. However, LOT’s owner, Polska Grupa Lotnicza (PGL), and Condor said that following the transaction they would repay in full the bridging loan that Condor received from Germany’s development bank KfW.

Rafal Milczarski, chief executive of LOT, said that the deal secured “the future of Condor, and guarantees the airline’s staff, clients and business partners, stability and new opportunities for growth”.

Poland’s prime minister Mateusz Morawiecki, whose Law and Justice party has made economic nationalism a key part of its political platform, welcomed the deal as a reversal of the trend of the past three decades, when Polish groups were frequently bought by foreign — and often German — investors.

“This is proof of the strength of the Polish economy,” he said.

However, Daniel Roeska, an analyst at Bernstein said that the transaction was unlikely to threaten Lufthansa, Germany’s national carrier, which itself bid for Condor last May.

“We would be surprised to see a radical competitive change driven by Condor and LOT. It likely provides a welcome extension of Condor’s life for employees and suppliers of Condor, but there remain substantial risks to this venture combining two of Europe’s smaller carriers,” he wrote in a note to clients, questioning how LOT would fund the renewal of Condor’s ageing fleet.

“We fail to see the strategic imperative for LOT or significant synergy benefits for the two companies which make us doubt the long-term success of this transaction. As such, we do not see a meaningful impact to other European airlines.”