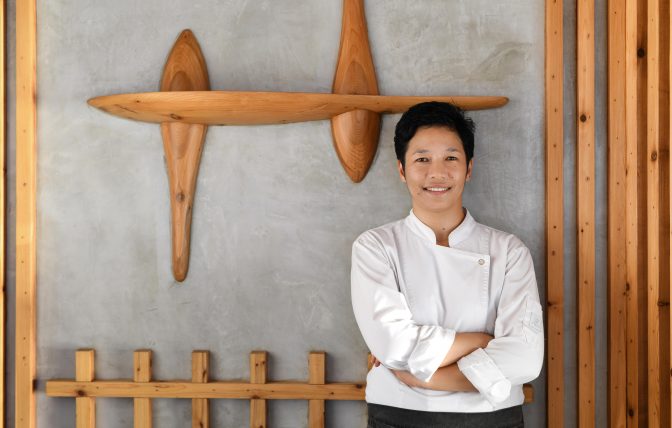 Preeti Bomzon is the Executive Chef at Lti Maafushivaru, a private island resort nestled in the idyllic South Ari Atoll. Our team sat down with Preeti to find out more about her beginnings as a chef, and to delve further into her career so far in the Maldivian hospitality industry.

Could you give a short introduction of yourself?

My name is Preeti Bomzon. I’m from India, from the hillsides which actually boast some of the best teas in the world. It’s very cold over there, and very different from Maldives. But I suppose that’s what brings me to the tropics.

I did Hotel Management in Calcutta, after which I worked in various hotels in India, including Taj, Oberoi, Hyatt Hotels. Right now, I’m the executive chef at Lti Maafushivaru in the Maldives, a position I’ve been in since January 2020.

When did you decide to become a chef? And how did you start your career?

There are two parts to this answer.

First of all, I come from a big family with several aunts and uncles on both sides. And many of them, in hindsight, cooked really amazing food. By the time I was 9 or 10 years old, I could discern the differences in taste between when one aunt cooked and the other cooked, or when my mother cooked, or when my grandmother cooked. I understood that tastes and flavours from different people varied, and I understood what tasted good. I didn’t know I wanted to be a chef back then, but that understanding, that small culinary sense in me, it was giving me a little knock.

Then there’s the other part. When I became a teenager, as much as I liked to hang around with my friends and have fun, I found that being in the kitchen, cooking and helping, it was just as fun and enjoyable. Fast forward five years, and there’s suddenly a hotel management brochure that’s been given to me. I was 17 at the time, and I did not know what it entailed. But I went for it, and that’s when I began to truly learn how hotels ran. I learned about the departments that kept a hotel afloat – housekeeping, front office, F&B, and kitchen. I realized then that I was really good in kitchen. Whether it was theory or practical, I didn’t have to put so much effort in it. I was just good at it. It was my calling; it felt like a magnetic pull.

After college, I got the chance to join a pre-opening property in Delhi and that is how my career started. That was Hyatt, in 2000. Then I took a transfer to Hyatt Calcutta, after which I joined Taj, and then the Oberoi, one of the most respectable hotel chains in India. Then I got the chance to go to Vietnam; I was there for 10 years. I started with Six Senses, as an Executive Sous Chef, and continued for multiple years in other hotels in Executive Chef positions as well.

What has your experience in the Maldives been like so far?

I initially stayed at Male’ and Hulhumale’, which are way smaller. But I felt an affinity to Maldives, even then. Life was very convenient; everything I needed I could find. I had no worries. At the time, I spent a lot of time around computers doing office work.

Things change when you actually set foot on the property. Everything was under construction back then. I love pre-openings, the organized chaos. For me, it’s pure adrenaline, and that’s what I love. I think that’s also part of the reason why I came to Lti Maafushivaru, because it was under pre-opening. To be able to set up the place with your hands, to touch every equipment, to be able to say: “This is where I want the fryer, this is where I want the oven, this is the person I want for the teppanyaki, this is the person I want for the tandoor, this is the pastry person that I need and recommend…” To be able to build the place and team, to be able to make that first dish on the menu. That is what brings true passion to the property.

Obviously, we opened when the world was rife with the virus. Everyone knows what was happening in the world. With that monumental challenge, we opened Lti Maafushivaru in August 2020. We were very proud to have our first guest. That heart-pumping thrill of knowing that the food you’re preparing is for a real guest this time; this is not a training, this is not a simulation. This is happening in real time.

So, it was very exciting to be able to slowly build up the team, hire more staff, get more equipment, and set up more kitchens. That satisfaction you get, it’s unlike anything else. It’s not just about doing what you’ve done, but realizing that this is only the beginning of the entire journey.

How does Lti Maafushivaru cater to its guests’ tastes?

At Lti Maafushivaru, we have 81 rooms, 5 restaurants and 8 different menus. That means that for every 16 rooms, there’s a restaurant. This property is an F&B intrinsic place. You wouldn’t expect that there to be not only a Japanese restaurant, but a teppanyaki. You wouldn’t expect there to be an amazing restaurant overwater which specializes in grills, seafood, the best premium meats. And just a few meters down, you’ll find a restaurant which has a separate menu for lunch, and a really upscale menu for dinner which is more on the Western/Mediterranean side.

In the afternoon, you get 3 menus, including a tapas menu with a gorgeous range of tapas. We have a lounge that offers the best baguettes, wraps, ice creams, and really delicious pastries. There’s also an extensive lunch menu, which covers the tastes from Italy, Maldives, India, Sri Lanka, Vietnam, Thailand, a bit of Mexican fare, a touch of Japanese. That’s why I’m confident that if there’s a guest that comes in with a really diverse taste, Lti Maafushivaru is the address.

You’ve been a chef for 21 years. What do you consider to be your biggest achievement?

My biggest achievement has been my progress thus far, and having been able to work in 3 different nations. The success I’ve achieved at work has translated into personal success as well. For example, I love to travel. But I wouldn’t be able to travel without success at work. Success in my career has allowed me to indulge in my own personal ambitions and aspirations.

It’s not just about working in Maldives, either. It’s about being able to meet people with such different outlooks, such different ways in which they perceive hospitality. In my current team, there are members of 7 different nationalities, so to be able to work with them together harmoniously is a feat in itself. Altogether, this culminates into my biggest achievement.

As a woman, have you faced any added challenges in this industry? Why do you think there such few women in executive chef positions?

A woman in power should be a company’s biggest asset. Women are natural caregivers, natural teachers and mentors. Women also generally have a lot more intuition. I’m very intuitive, for instance. I anticipate, whether it’s a positive or negative thing. I am very resourceful and organized. All of these skills help me do my job properly.

The career challenges that I face are not gender-based. That’s just the nature of the job. I don’t see any reason why there aren’t more women in the field. It’s a job we do beautifully at homes. So why can’t we do it at a five-star hotel?

Lastly, what advice do you have for young chefs looking to climb the ranks?

I believe that a chef is only as good as his or her last dish. You may cook 62 or 63 incredible dishes, but if the 64th dish isn’t good, that’s what you’ll be judged for. Whether you’re a commis chef, a sous chef or an executive chef, you need to be at the top of your game all the time. The tenacity, the perseverance, the knowledge; you need to be hungry for it. You need to be ready for the heat. And I’m not talking about temperature.

As a young chef, you’re likely at ground zero. You’re at the bottom of the food chain. To climb the ranks and make it, you need to have passion, you need to have patience. You need to be able to literally stand on your feet for long hours. For the first four or five years, you really need to invest in the profession without hoping that you’ll get a promotion tomorrow, or day after tomorrow. If you’re doing your job correctly, the promotion will come when you’re not even looking for it.