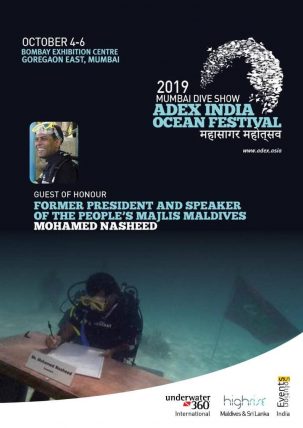 Former president and the speaker at the people’s majlis of Maldives to be the guest of honor at the Asia Dive Expo (ADEX) INDIA – Mumbai Dive Show at Bombay Exhibition Center, Mumbai.

The expo is celebrating their 25th anniversary in 2019 and is regarded as the most successful and longest-running scuba diving travel roadshow which has been previously hosted in Singapore and China. This year marks the first time for the expo to take place in India under the title ‘Adex India – Mumbai Dive Show’ which will be held from 4 October until 6 October at the Bombay Exhibition Center, Mumbai.

Speaking about the expo, the founder of Underwater 360 Mr John Thet said “Adex brand is known across the world as Asia’s longest-running dive travel event, and we launched Adex India – Mumbai Dive Show brand while we celebrated our 25 anniversary this year at Suntec City, Singapore without a doubt knowing we are making history as the first diving event in India.”

The director of Events Solution, Mr. Amit Malhotra noted that India has the greatest number of travelers within and across South Asia and the country is a prime destination for several travel-related events. He was quoted saying “in terms of events, we are not doing anything new. But in terms of segment and scope of the event, ‘Adex India – Mumbai Dive Show’ is the first dive travel event to be held in India.” He further added “while our line of expert speakers is representing the largest organization and experience, we have speakers from PADI, Parley for the Oceans, Planet Ocean Foundation” and noted other speakers included notable and award-winning female divers, underwater photographers and filmmakers.

For the Adex India – Mumbai Dive Show, the organizers have appointed upcoming Bollywood diva Parineeti Chopra, who is a certified scuba diver, as the celebrity ambassador of Adex India. Furthermore, major scuba diving destinations, properties and service providers from India, Indonesia, Philippines, Thailand, Malaysia, Sri Lanka and even from the Maldives have confirmed their participation while the world’s leading scuba diving organization PADI will be at this breakthrough event for India.

The Adex India – Mumbai Dive is a joint vent organized in collaboration with Underwater 360 – Singapore, HighRise Maldives and Events Solution from India.