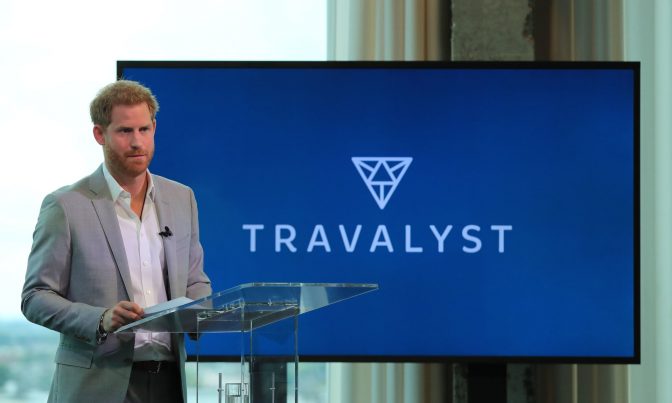 Amid questions over his eco-credentials, Harry has joined forces with travel industry firms to look at improving conservation and benefitting local communities.

Prince Harry’s new charitable foundation has helped launch an initiative to raise awareness and promote sustainable travel. “Travalyst” is a collaboration between five companies – Booking.com, Ctrip, Skyscanner, TripAdvisor and Visa – aimed at improving conservation efforts, protecting the environment and helping develop the economies of communities involved in the tourist industry.

The initiative has been in the planning for around two years but with the prince making headlines in recent weeks over his use of private jets the timing of the launch has been criticised, with some accusations of hypocrisy. The companies involved were unable to share concrete plans, saying only that further announcements could be expected within the next 18 months.

Travalyst is intended to capitalise on the strength and breadth of the global travel market, foster increased collaboration across the industry, and stimulate and support new solutions and initiatives in sustainable travel. The founding partners want to spark a movement of like-minded companies, organisations, NGOs, and changemakers to transform the future of travel into a more sustainable one.

The Duke of Sussex said: “Travel has the unparalleled power to open people’s minds to different cultures, new experiences and to have a profound appreciation for what our world has to offer. As tourism inevitably grows, it is critically important to accelerate the adoption of sustainable practices worldwide and to balance this growth with the needs of the environment and the local population. Bringing companies, consumers and communities together is our best chance to protect destinations and ecosystems for future generations.”

The initiative comes as travel is on the rise, the Associated Press reported. The number of trips taken every year has more than doubled since 2000, according to the World Bank. In 2018, people around the world took 1.4 billion international trips, a figure that was reached two years faster than the UN’s World Tourism Organization predicted. The initiative also comes amidst growing awareness of the travel industry’s impact on the environment and the climate.