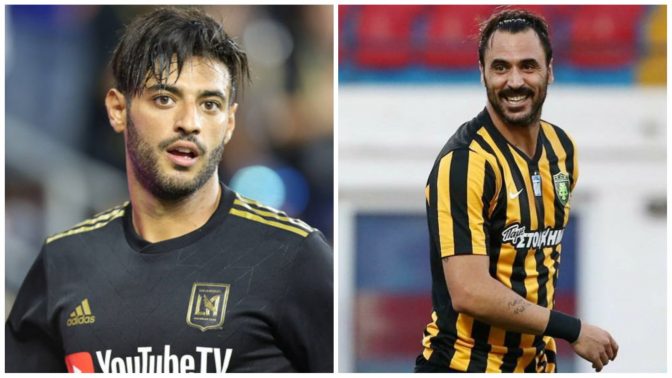 Vela captains and plays as a winger for Los Angeles FC and the Mexico national team. He started his career at Mexican club Guadalajara, where he caught the eye of various European clubs after finishing as the top scorer at the 2005 FIFA U-17 World Championship, eventually joining Premier League club Arsenal that year. After joining Arsenal, he had loan spells at Spanish clubs Salamanca and Osasuna, as well as fellow English club West Bromwich Albion, settling with Real Sociedad initially on loan and then permanently on 10 August 2012. He joined Los Angeles FC in January 2018, winning the Supporters’ Shield and the MLS Golden Boot in his second year, and setting a new league record for most goals in a season, with 34. He was also voted Most Valuable Player.

Almeida plays as a center-forward for Académica de Coimbra. He made a name for himself in Germany with Werder Bremen where he remained for four seasons, reaching one UEFA Cup final and scoring 63 official goals. Almeida, whose international career with Portugal spanned a decade, succeeded in becoming a regular after the departures of Pauleta in 2006 and Liédson in 2010. He represented the nation at two World Cups and as many European Championships, earning 57 caps and netting 19 times.