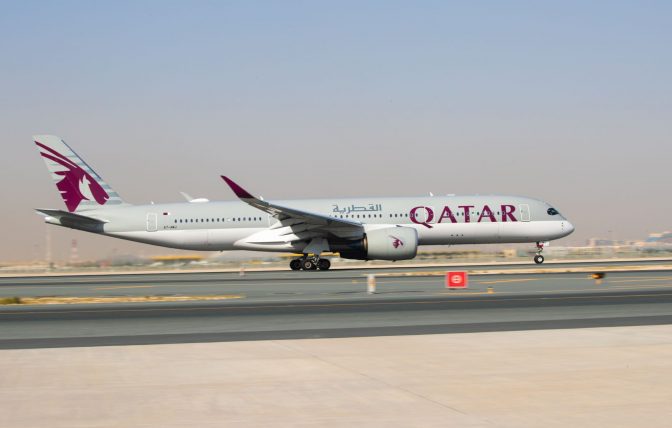 Qatar Airways Continues Sustainable Operations as it Rebuilds its Network

Qatar Airways is one of the few global airlines to have never stopped flying throughout this crisis. The airline’s mix of modern fuel-efficient aircraft helped it to develop a sustainable and adapted solution, allowing it to continue flying routes with less overall demand as it has a variety of aircraft it can select from to offer the right capacity in each market. Due to COVID-19’s impact on travel demand, the airline has taken the decision to ground its fleet of Airbus A380s as it is not commercially or environmentally justifiable to operate such a large aircraft in the current market.

Environmentally conscious passengers can travel with the reassurance that Qatar Airways continuously monitors the market to assess both passenger and cargo demand to ensure it operates the most efficient aircraft on each route. Finding the right balance between passenger and cargo demand has enabled the airline to continue operating its full fleet of Airbus A350 and Boeing 787 aircraft, helping take people home safely and providing reliable airfreight capacity to support global trade and the transport of essential medical and aid supplies.

Qatar Airways is the largest operator of A350 series aircraft, and was the launch customer for both the A350-900 and A350-1000. With a total of 49 A350 variants in the current fleet at an average age of 2.5 years, and a seating capacity optimized for the current market, the A350 is perfectly positioned to lead the airline’s rebuilding of its network. The 30 Boeing 787 aircraft in the Qatar Airways fleet also provide appropriate capacity to offer the right capacity on routes in Europe while markets recover. As the world prepares itself to emerge from the COVID-19 crisis, Qatar Airways’ A350 fleet is the aircraft of choice for the most strategically important long-haul routes to the Americas, Europe and Asia-Pacific regions.

Qatar Airways Group Chief Executive, His Excellency Mr. Akbar Al Baker said: “Qatar Airways Group has a strong record of industry leadership on sustainable operations. We take our responsibilities to care for the environment seriously and sustainability is at the forefront of our business planning across the group, this is why we have an average fleet age of less than five years, one of the youngest in the world. Thanks to our strategic and diversified investment in our fleet, the viability of our operations has not been dependent on any specific aircraft type. This has enabled us to be one of the few global airlines to never stop operating during this crisis, carrying over two million passengers and in the process becoming the largest international airline in the world. Our fleet mix has enabled us to continue operating routes throughout this crisis ensuring we do not leave passengers stranded.

“As we rebuild our network, passengers can rely on us to operate an honest schedule of flights to take them where they want to go, using the right size aircraft to offer sensible capacity on each route. As a result, we will not resume flying our fleet of A380 until demand returns to appropriate levels. Having closely studied the environmental impact numbers, flying such a large aircraft with a low load factor does not meet our environmental responsibilities or make commercial sense. Our young fleet of Airbus A350 and Boeing 787 aircraft are a much better fit for current global demand.”

Qatar Airways was the first airline in the Middle East to secure accreditation to the highest level in the IATA Environmental Assessment Programme. While its home and hub, Hamad International Airport, will be the first airport in the region to achieve a 4-star Global Sustainability Assessment System (GSAS) rating as part of plans to expand its capacity to more than 53 million passengers annually by 2022.

While Qatar Airways has remained focused on its fundamental mission of taking people home and transporting essential aid to impacted regions, the airline has not forgotten its environmental responsibilities. The airline’s internal benchmark compared the A380 to the A350 on routes from Doha to London, Guangzhou, Frankfurt, Paris, Melbourne, Sydney, Toronto and New York. On a typical one-way flight, the airline found the A350 aircraft saved a minimum of 16 tonnes of carbon dioxide per block hour compared to the A380. The analysis found that the A380 emitted over 80% more CO2 per block hour than the A350 on each of these routes. In the cases of Melbourne, New York and Toronto the A380 emitted 95% more CO2 per block hour with the A350 saving around 20 tonnes of CO2 per block hour. Until passenger demand recovers to appropriate levels, Qatar Airways will continue to keep its A380 aircraft grounded, ensuring it only operates commercially and environmentally responsible aircraft.

Qatar Airways’ focus on sustainability also extends to its home and hub, Hamad International Airport (HIA), which was recently voted ‘Third Best Airport in the World’ and ‘Best Airport in the Middle East’ for the sixth year in a row. It recently announced plans to expand capacity to more than 53 million passengers annually by 2022, further positioning itself as the airport of choice in the region for savvy international travellers. The terminal building will be the first airport in the MENA region to achieve a 4-star Global Sustainability Assessment System (GSAS) rating, which was developed for rating green buildings and infrastructures. The terminal will also be a LEED Silver certified building, featuring a number of innovative energy efficiency measures.

Globally, Qatar Airways relaunched 11 destinations on 1 July including Bali Denpasar, Beirut, Belgrade, Berlin, Boston, Edinburgh, Larnaca, Los Angeles, Prague, Washington DC, and Zagreb. This marks the largest number of route resumptions in a single day since Qatar Airways started to rebuild its network in what the airline has dubbed ‘Takeoff Wednesday’. By the end of July, its network will expand to more than 450 weekly flights to over 70 destinations worldwide.

Qatar Airways has further enhanced its onboard safety measures for passengers and cabin crew. The airline has introduced Personal Protective Equipment (PPE) for cabin crew, which includes gloves, facemasks, safety glasses and a new protective gown that is fitted over their uniforms. A modified service that reduces interactions between passengers and the crew inflight has also been introduced.

Onboard, all Qatar Airways passengers are now provided with a complimentary protective kit. Inside a ziplock pouch, they will find a single-use surgical facemask, large disposable powder-free gloves and an alcohol-based hand sanitiser gel. The airline has also introduced disposable face shields for adults and children. Passengers travelling from Hamad International Airport (HIA) will receive their face shields at the check-in counters, whereas at other destinations, the face shields will be distributed at the boarding gates. For full details of all the measures that have been implemented onboard and in HIA, please visit qatarairways.com/safety.

To ensure travelers can plan their travel with peace of mind, the airline has extended its booking policies to offer even more choice to its passengers. The airline will allow unlimited date changes, and passengers can change their destination as often as they need if it is within 5,000 miles of the original destination. The airline will not charge any fare differences for travel completed before 31 December 2020, after which fare rules will apply. All tickets booked for travel up to 31 December 2020 will be valid for two years from the date of issuance. For full terms and conditions visit www.qatarairways.com/RelyOnUs.

Qatar Airways is committed to openly reporting on its sustainability performance in order to maintain the trust on which its long-term environmental leadership is built. Please visit its Environment website to view the latest Sustainability Report and Environmental Policy.