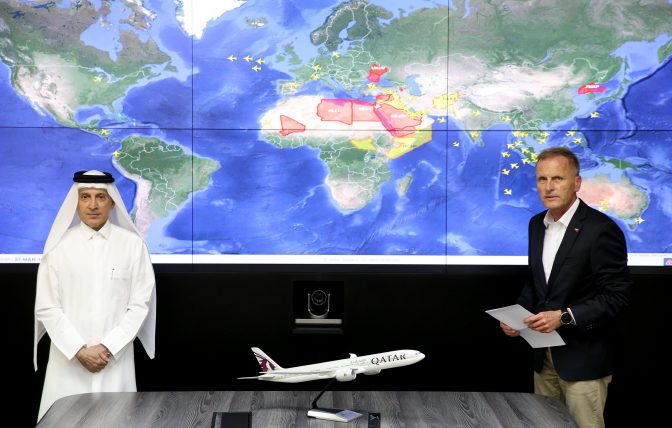 Qatar Airways Group Chief Executive, His Excellency Mr. Akbar Al Baker met with the Ambassador of the Federal Republic of Germany to the State of Qatar, His Excellency Mr. Hans-Udo Muzel, who expressed his gratitude to Qatar Airways for flying thousands of Germans from all over Asia to their homes in Germany at this crucial time, in spite of the challenges faced in the aviation industry posed by the global pandemic, flight cancellations and various airport closures.

While the government has restricted entry in Germany since 18 March 2020, the airline continues to operate the following flights for German nationals and their family members, as well as other nationals residing in Germany:

Qatar Airways Group Chief Executive, His Excellency Mr. Akbar Al Baker, said: “We understand that this is truly a challenging time where everyone’s mission is to reach home safely to see their loved ones. Through our 130 daily flights to more than 65 cities worldwide, we believe in sparing no effort to go the extra mile when it comes to taking our passengers home. We are continuing to work closely with embassies and governments around the world, and wherever possible we will reinstate or add more flights as needed.”

Ambassador of Germany to the State of Qatar, His Excellency Mr. Hans-Udo Muzel, said: “We are very grateful to Qatar Airways for the work they have done to repatriate German citizens. I wanted to personally thank His Excellency Mr. Akbar Al Baker personally for the support he and his dedicated team have provided in making sure that flights from various destinations in Asia, to Frankfurt, Berlin and Munich have been operating so that families can be reunited back at home.”

Qatar Airways recently launched a new commercial policy to allow all passengers the flexibility to alter travel plans up to three days prior to departure for flights booked till 30 September 2020. This flexibility enables passengers to change their travel plans free of charge by altering the dates of their booking or exchanging their ticket for a travel voucher valid for one year. The travel voucher will be equal to the value of their unutilized ticket – plus an additional 10%, excluding statutory taxes. This policy includes award flights. For more information visit qatarairways.com/travelwithconfidence.

As an airline, Qatar Airways maintains the highest possible hygiene standards, which include the regular disinfection of aircraft, the use of cleaning products recommended by the International Air Transport Association (IATA) and the World Health Organization (WHO), and thermal screening of crew.

In addition, Qatar Airways’ aircraft feature the most advanced air filtration systems, equipped with industrial-size HEPA filters that remove 99.97% of viral and bacterial contaminants from re-circulated air, providing the most effective protection against infection. All the airline’s onboard linen and blankets are washed, dried and pressed at microbial lethal temperatures, while its headsets are removed of ear foams and rigorously sanitized after each flight. These items are then sealed into individual packaging by staff wearing hygienic disposable gloves.

Qatar Aircraft Catering Company (QACC) was the first organisation in the world last year to achieve ISO22000:2018 certification from Bureau Veritas with UKAS accreditation, confirming its Food Safety Management System meets the highest standards. All meal service utensils and cutlery are washed with detergents and rinsed with demineralized fresh water at temperatures that kill pathogenic bacteria. All sanitized equipment is handled by staff wearing hygienic disposable gloves, while cutlery is individually re-packed.