Qatar Airways showed its support for Breast Cancer Awareness Month with an all-female crew of 15 operating flight QR95 from Doha to Zurich on 9th October 2019.

Two female pilots and an all-female cabin crew of 13 staffed the service onboard an Airbus A350-900, one of the most technologically-advanced aircraft in the Qatar Airways fleet.

Passengers received a special onboard announcement from the captain, along with Qatar Airways ‘Think Pink’ wristbands and limited edition pink BRICs amenity kits during the service to the Swiss city. 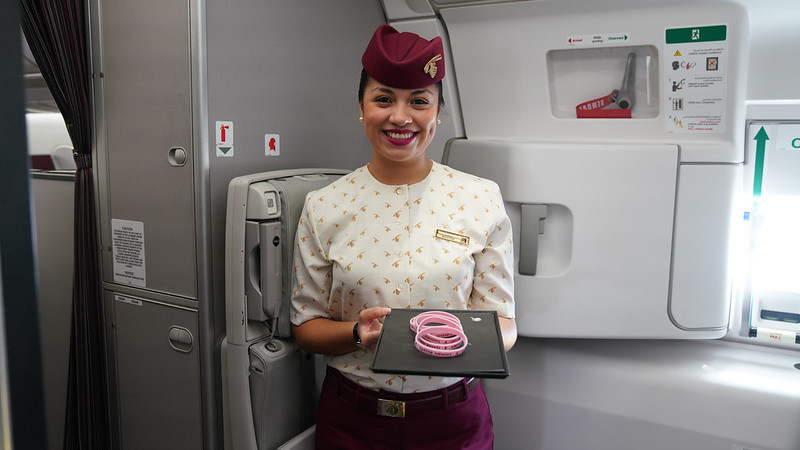 Awareness and education is everything in the fight against cancer, and Qatar Airways is committed to reinforcing the message of early detection and promotion of a healthy lifestyle to help eradicate this devastating disease.”

Flight QR95 is the latest in a series of ‘Think Pink’ Breast Cancer Awareness Month events and activities organized by the multiple award-winning airlines, in association with Qatar Cancer Society (QCS), throughout October.

Qatar Airways was named ‘World’s Best Airline’ by the 2019 World Airline Awards, managed by international air transport rating organization Skytrax. It was also named ‘Best Airline in the Middle East’, ‘World’s Best Business Class’ and ‘Best Business Class Seat’, in recognition of its ground-breaking Business Class experience, Qsuite. It is the only airline to have been awarded the coveted ‘Skytrax Airline of the Year’ title, which is recognized as the pinnacle of excellence in the airline industry, five times.

Qatar Airways currently operates a modern fleet of more than 250 aircraft via its hub HIA, to more than 160 destinations worldwide. The airline has recently launched an array of exciting new destinations, including Rabat, Morocco; Izmir, Turkey; Malta; Davao, Philippines; Lisbon, Portugal; and Mogadishu, Somalia. The airline will add Langkawi, Malaysia and Gaborone, Botswana, to its extensive route network in December 2019; Luanda, Angola, on March 2020 and Osaka, Japan, on April 2020.