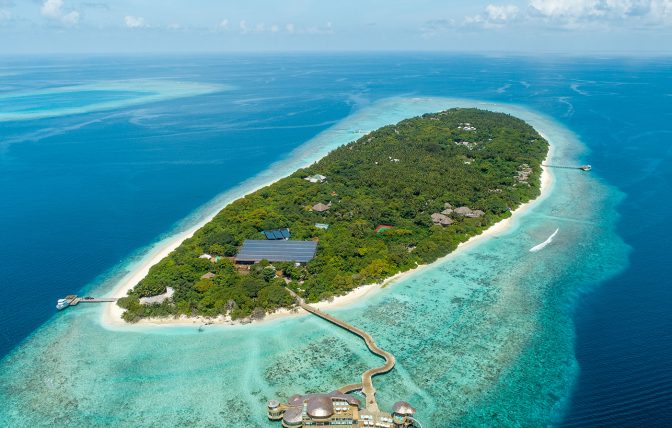 As regular guests to the Maldives might know, the islands can often be prone to large populations of mosquitoes, particularly during the monsoon season. Mosquito-borne illness is a concern in the Maldives, although it varies by island and by time of year. The island nation has been malaria free since 1984, however cases of dengue and chikungunya are still found on some local islands.

While many resorts use chemical fogging to manage the mosquito population, Soneva recently revealed that for more than a year they have been working with Biogents, a company on the forefront of international mosquito control research, in order to introduce a sustainable, insecticide-free mosquito management system. The aim of this partnership between Soneva and Biogents is to bring the mosquito population on the island of Kunfunadhoo, the home of Soneva Fushi, down to zero, to show the international community that it is possible to use sustainable insecticide-free alternatives in mosquito control, and to be the first mosquito-free island in the Maldives.

Starting July 2019, a month into the operation, a sharp decline in the number of mosquitoes trapped on the island was already observed, and today the mosquito population has been reduced by around 95-98%. Soneva’s target is to eliminate all mosquitoes on Kunfunadhoo island by the end of 2020. Biogents has assured Soneva that eliminating mosquitoes from the island will have no impact on the local food chain and ecosystems, as Kunfunadhoo has low biodiversity and no freshwater aquatic ecosystems where mosquito larvae are a necessary part of the food chain. The halting of chemical fogging has also resulted in the appearance of a greater diversity of flora and fauna on the island.

Before the partnership with Biogents, the mosquito population at Soneva Fushi was managed by a conventional pest control company with hot fogging and mist blowing. However, the mosquito population built strong resistance to this treatment over time, rendering it ineffective. Moreover, fogging is directed against adult mosquitoes only. While mosquitoes turned resistant, the fogging reduced the number of other insects usually found on Kunfunadhoo Island, including species of butterflies, dragon flies, bumble bees, beetles and more. Now, with the new mosquito management system, guests and Hosts alike have seen an increase in the Maldives’ native insects. These natural pollinators are now back in abundance, which means there are more flowers, more fruits and Soneva Fushi’s organic gardens are thriving as a result with more produce to serve its restaurants. With the increase in fruits and insects, there are also more birds visiting the shores of Kunfunadhoo and fire flies are once again spotted at night.

“Improving the efficacy of mosquito traps has always been the core expertise of Biogents. So, we had the right tools to offer, but the approach also needs a solid understanding of mosquito ecology. Soneva really understands this, and thanks to the vision and expertise of all the involved partners, the project is indeed setting new standards,” said Dr. Andreas Rose, Co-Founder and Management Board Member, Biogents.

“The adoption of this project by Soneva is exemplary and sets an example for the rest of the world on how sustainable and environmentally-friendly mosquito management can replace the indiscriminate use of chemical pesticides,” said medical entomologist Bart G.J. Knols, PhD MBA, who together with Akib Jahir, MSc, Soneva’s Integrated Pest Control Manager, leads the implementation of the project on Soneva Fushi alongside Biogents and Soneva.

“At Soneva, we have always used nature as an inspiration for our innovation. In fact, our organisational structure is inspired by the relationship of the planets to each other. In the middle of last year at Soneva Fushi, we set a target to become the first island to be completely mosquito free. We installed more than 500 Biogents traps throughout the island. While some mimic mosquito breeding sites, others  hold a sachet that mimics human sweat with the smell of lactic acid. We also add a mix of sugar water and yeast as a means to produce carbon dioxide, mimicking exhaled human breath. So, these traps smell and breathe like a human being. The mosquitoes are lured into a catch-bag where they dry out and die.

In the first weeks of implementing this, the traps caught up to 9,000 mosquitoes a day, on average 20 mosquitoes per trap. Since then, this number has reduced to single digits. We have two mosquito species on the island, the Aedes and the Culex. The Culex is nearly extinct and we hope that the Aedes will soon follow. It is my hope that this will be a perfect example of how closely following and understanding the laws of nature, and innovating around it, one can find solutions that end up being more effective than solutions that are the result of bioengineering,” said Sonu Shivdasani, Soneva’s CEO and Co-Founder.

Two types of mosquito traps, with a total of more than 500, have been deployed across the island: the BG-GAT, which is a passive trap for egg-laying tiger mosquitoes that have bitten someone and are searching for a place to lay eggs; and the BG-Mosquitaire CO2, which attracts mosquitoes in search of blood. Carbon dioxide, produced through yeast and sugar fermentation helps attract the mosquitoes in combination with lactic acid that humans emanate from the skin. In tandem to placing the traps, Knols and Jahir also educated Soneva Fushi’s Hosts about mosquito breeding sites and how to reduce the amount of stagnant water found on the island. This included reducing the use of tarpaulins, island clean-up days to remove coconut shells and any other objects that could contain water, and daily inspections of island sectors for the presence of mosquito larvae. Recently, Soneva gifted a number of mosquito traps to Parliament in Malé, the capital of the Maldives, and is currently deploying traps at Soneva Jani in the Noonu Atoll. There, in a time-frame of 48 hours, a single BG-Mosquitaire CO2 trap caught a record number of 2,972 mosquitoes.