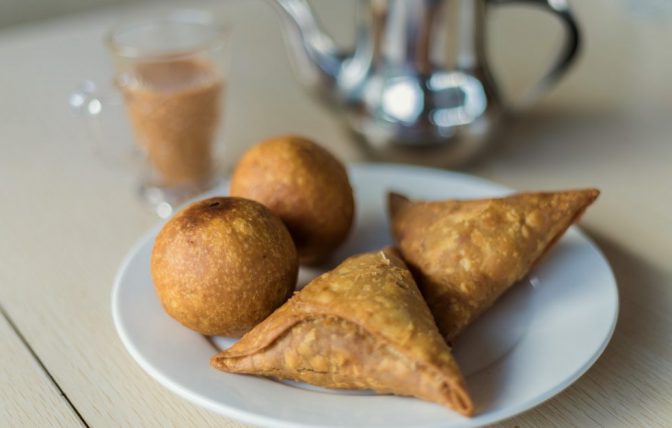 What are the best local foods to try in Maldives? It’s a simple question, and frequently asked by many a tourist and other visitors to Maldives. Since it’s a rather subjective question you’re likely to be inundated with recommendations ranging from seafood soups and short eats to vegetable side dishes, depending on who you pose the question to. Maldives is an island nation so it’s a given that seafood, particularly tuna, will play a major role in any Maldivian cuisine but tourists are often surprised to hear about the range of vegetable recipes included in an average meal. One of the other most frequently asked questions is whether Maldives caters to vegetarians too. The short answer is that, yes we do! And that’s not all. Spend a few weeks in Malé or any other Maldivian island and you’ll soon realize that even though the traditional Maldivian meals usually consists of fish, coconuts, and some starchy items, there are also a huge variety of dishes that take inspiration from oriental and Indian cooking, ensuring that no matter what your tastes are you’ll always find something you like at every meal in Maldives.

However, if you really want to just jump in and try out some local flavours, the best way to start is with the short eats and snacks. The short eats in Maldives aren’t that different from those in Indian or Sri Lankan, so chances are that if you are fan of Indian or Sri Lankan short eats you’ll feel right at home with the Maldivian counterparts. Most of them can be immediately identified by their unique shape. For example, gulha is round, bajiyaa triangular, bis keemiyaa rectangular, kulhi bis oval-shaped, and so on. Here now is a list of the three most popular short eats that you can order at any Maldivian café or hotel. Try them all with a steaming cup of hot black or milk tea. 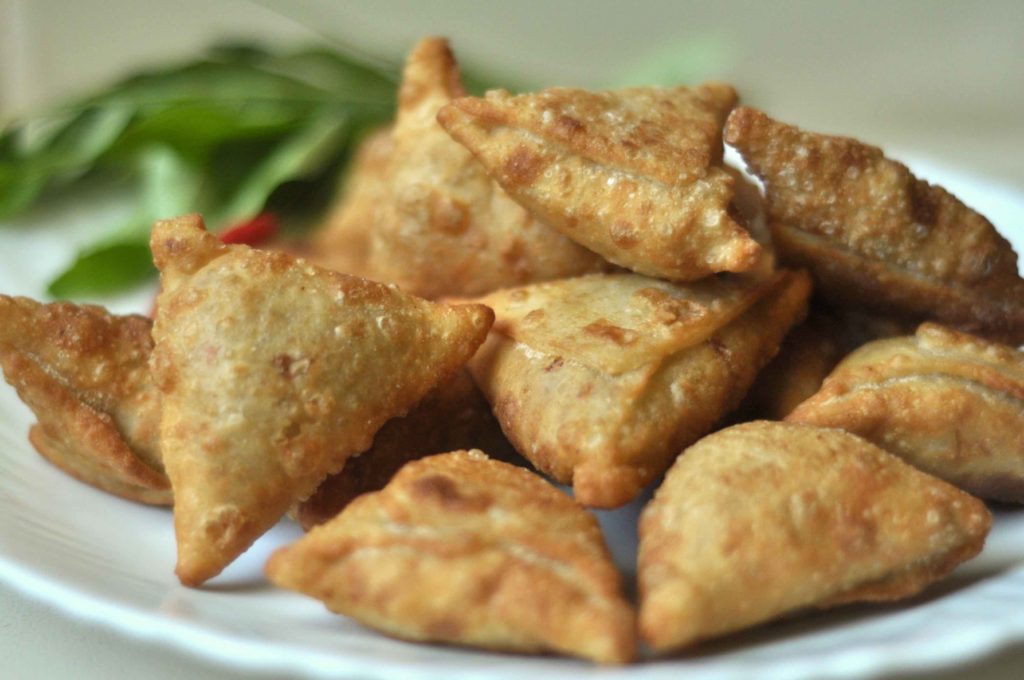 Similar to the samosa found in most South Asian countries, the bajiyaa is one of the most popular short eats among Maldivians. It consists of a fried (or sometimes baked) triangular patty shell with a savoury filling. The most notable difference between samosas and bajiyaas is the content of the filling. While samosas usually include spiced potatoes, onion, peas, coriander and lentils, a Maldivian bajiyaa is filled with a fried mix of onions, dry fish, curry leaves, curry powder and a pinch of sugar. Of course, like most Maldivian short eats, bajiyaas come in many sizes and flavours; the taste solely dependent on the whim of the cook. Sometimes, instead of tuna the bajiyaa might contain chicken pieces. If so, these bajiyaas are usually identified by a red-coloured mark on the pastry. In most hotels, a chicken bajiyaa is more expensive than the tuna version. Other times you might even find grated coconut being used as one of the ingredients in the filling. Bajiyaas are popular no matter the occasion or time. They can be found at tea parties, children’s birthday parties and even weddings.

Bis Keemiyaa
Bis Keemiyaa is a favourite among tourists, most likely due to its mild taste. Like the bajiyaa, this too is a fried snack and the outer patty shell is rectangular in shape, while the contents of the filling give it a distinctly different taste from bajiyaas. 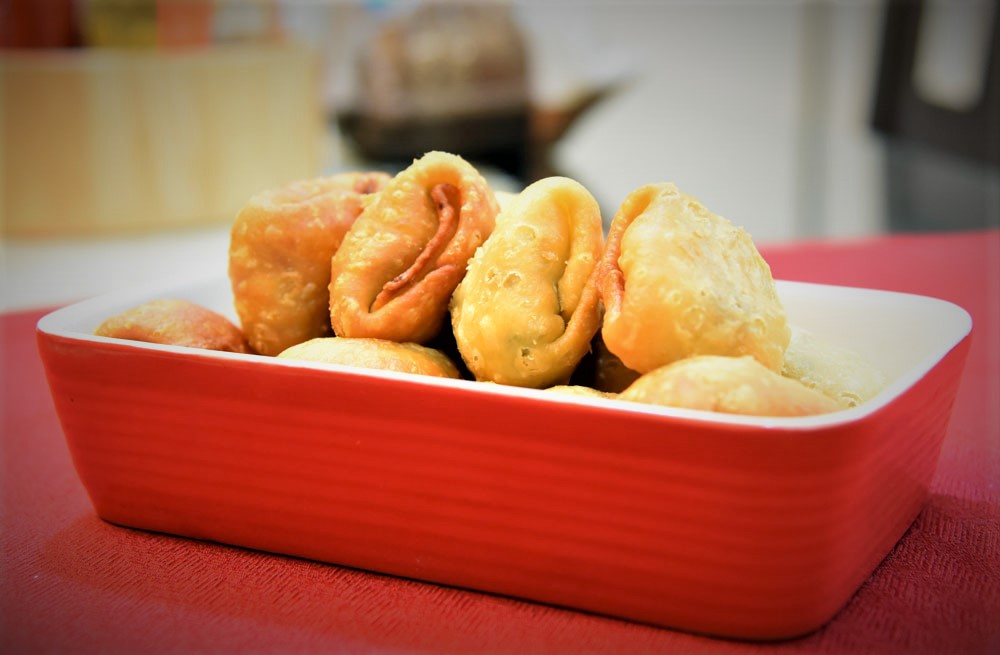 The name of the snack is a dead giveaway to the contents of the filling. ‘Bis’ in Dhivehi, the local language, means ‘egg’. So it’s very obvious that egg would be a major ingredient in the making of a ‘bis keemiyaa’. The filling consists of a mixture of chopped cabbage, diced hardboiled egg, chopped onions, a sprinkling of pepper and chilli, and some squeezed lemon. Most hotels add some tuna – dried or smoked – to the mix just to give it an additional Maldivian flavour, but some don’t. Bis Keemiyaa tastes best when served hot and crunchy immediately after deep frying it until golden brown.

Gulha
Next to bajiyaa, gulha (and handulu gulha) is probably the most popular snack food in Maldives. It is so popular that the making of gulha isn’t limited to just hotels and cafés; some houses that make exceptionally tasty gulha sometimes gain celebrity status among locals. It’s not uncommon in the mornings and evenings to find long queues of people waiting in line outside certain houses that are known to make good gulha. Those gifted with the talent to make such delicious gulha can easily earn a living by just selling their homemade gulha. 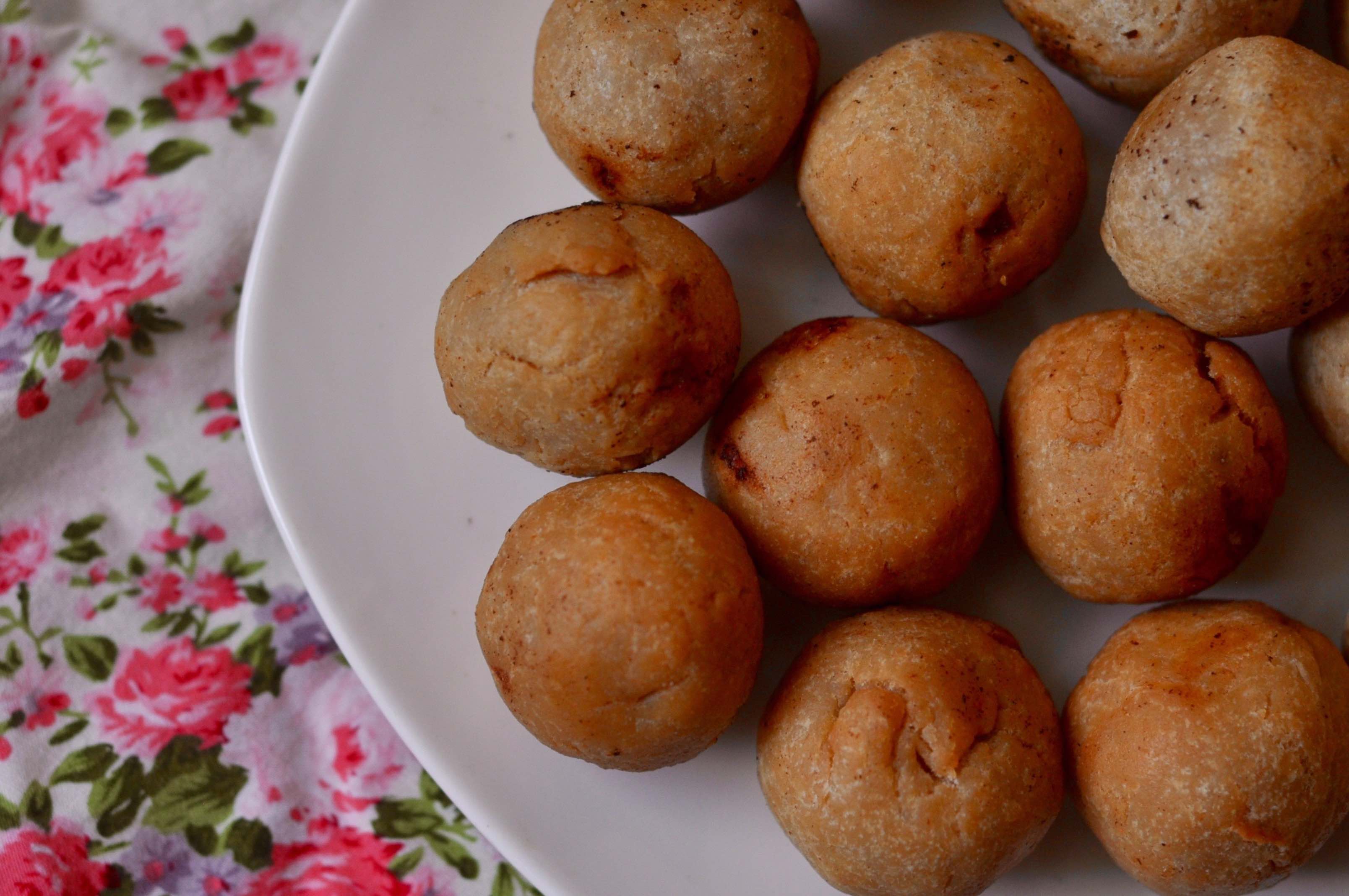 Gulha is usually translated as “fish balls”, but that’s not entirely accurate. Like most Maldivian short eats, the gulha is a savoury filling encased in a fried, crunchy shell. The dough used to make the outer shell is made from a mixture of flour and grated coconut. In the case of handulu gulha, rice which has been soaked in water overnight and crushed to form a powder is also mixed into the dough. This makes the shell a bit harder and crunchier. 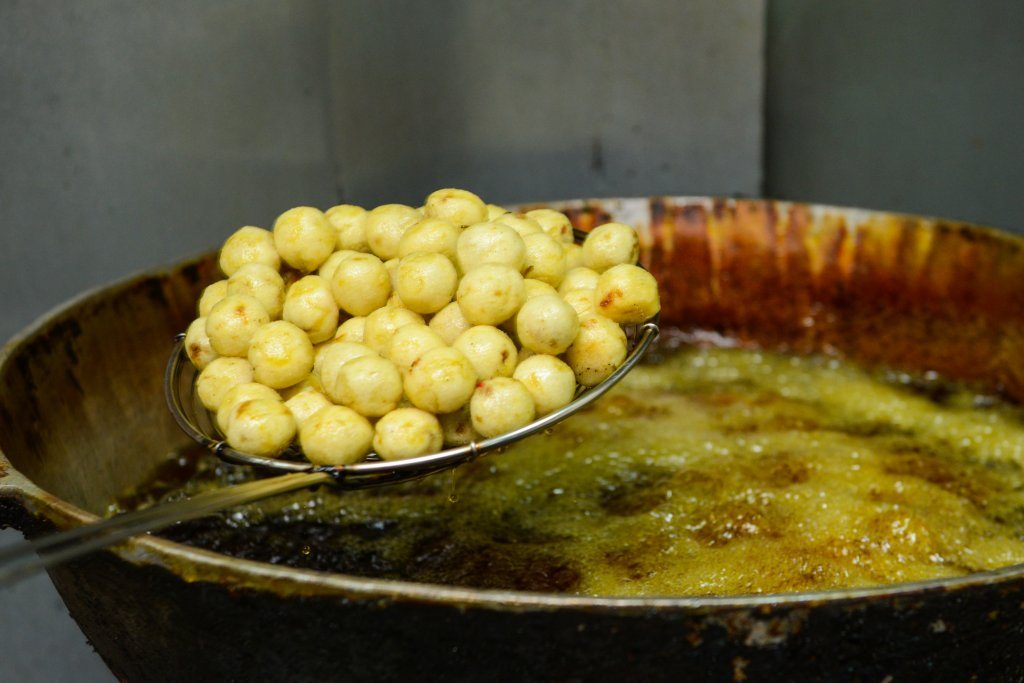 As with all local foods, the filling depends entirely on the cook and only a few are able to strike that delicate balance of spices and fish that turns an ordinary gulha into a mouth-watering snack. The usual ingredients of the filling consist of smoked tuna, onion, ginger, curry leaves, chilli, salt, lemon, grated coconut, turmeric and salt. The mix is then stuffed into the dough and made into ball shapes which are fried until they turn golden brown