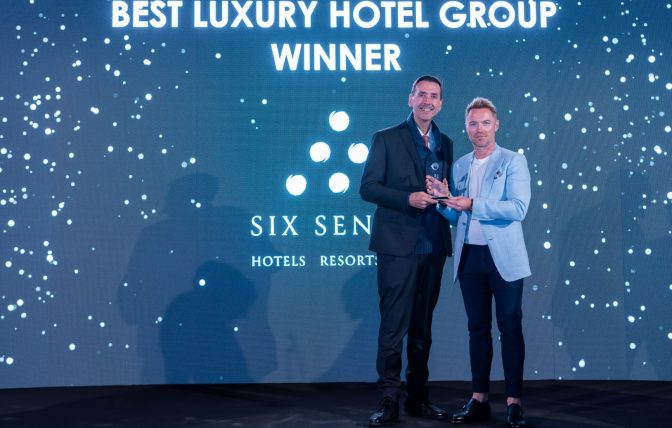 Six Senses Hotels Resorts Spas has been named as Luxury Hotel Group of the Year at the annual Ultimate Luxury Travel Related Awards (ULTRAs). The award was presented at a gala event at the Emerald Palace Kempinski Hotel in Dubai on January 27, 2020.

Since September 2019, the readers of the UK and Middle East editions of Ultratravel, the users of Telegraph Travel – one of the biggest travel websites in the world – and Black Card holders from the sixteen million members of the DISCOVERY loyalty program operated by the Global Hotel Alliance, have been voting for their favorite travel suppliers in the world. This provides the industry with a “true barometer of who’s getting it right in the world of luxury travel”.

Ultratravel searches for exciting hospitality experiences including hotels that “capture the spirit of their locality and itineraries that provide a sense of authenticity”. In naming Six Senses, the Ultratravel editors highlighted some of the brand’s new openings: “The team has greatly admired the five Six Senses properties in Bhutan, opening up a circuit around that wonderful country,” said Nick Perry, chairman of Ultratravel Limited.

In 2017, Six Senses Zil Pasyon won the Ultratravel Editor’s Award for Best New Hotel in the World. Opened in 2016, the resort is set on Félicité, a dramatically beautiful private island in the Seychelles.

Six Senses announced that they are delighted to be associated with the Ultratravel Collection. “Feedback from Ultratravel editors and readers is highly valuable and motivating for us to continue to excel in our hospitality offering,” says Chief Executive Officer Neil Jacobs. “As we grow, we have the opportunity to reflect our guiding principles, which include our pioneering spa and wellness offering, wholesome and sustainable cuisine, sleep health and self-discovery, in new ways that are relevant to each property and location.”