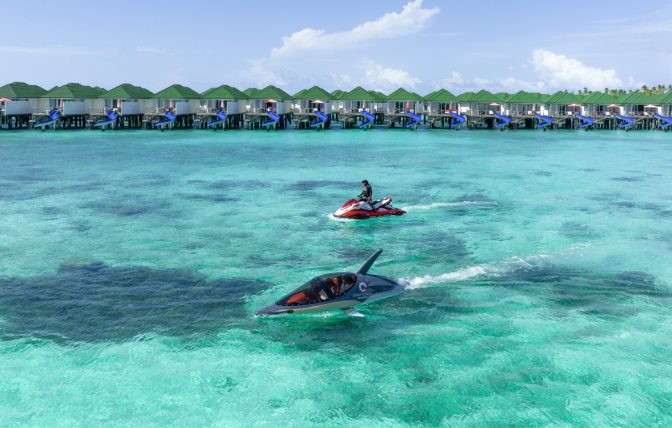 On a mission to bring its guests the broadest offering of memorable escapades and never-done-before experiences, Siyam World made waves last year when it opened with the Indian Ocean’s biggest floating water park – and now it has rivals trailing in its wake once again after launching the Maldives’ first ever Seabreacher. With the aerodynamic lines of a fighter jet and a sculpted shark-like body, the Seabreacher represents a dramatic breakthrough in recreational boating. Operating more like an aircraft than a watercraft, these extraordinary semisubmersible vessels can jump over, dive under and carve left and right through the waves – and are even capable of 360-degree barrel rolls on the water. The Seabreacher’s acrylic canopy and underwater view ports give pilot and passenger near-360-degree views, while its supercharged 260hp engine propels them across the water at speeds of up to 50mph.

Back on dry land, guests staying at The Beach House Collection – Siyam World’s exclusive enclave of 24 show-stopping one- to six-bedroom Residences – can also now explore the island’s trails in style with their very own custom Mini Moke. Recently revived and relaunched as the first heritage car marque to go fully electric, the British-made Mini Moke is the ultimate retro-chic beach whip. Each of Siyam World’s Mini Mokes comes with an onboard sound system and is named after a colourful 90s music legend – think “Green Day”, “Red Hot Chilli Peppers” and “Pink Floyd” – with a vibrant paintjob to match.