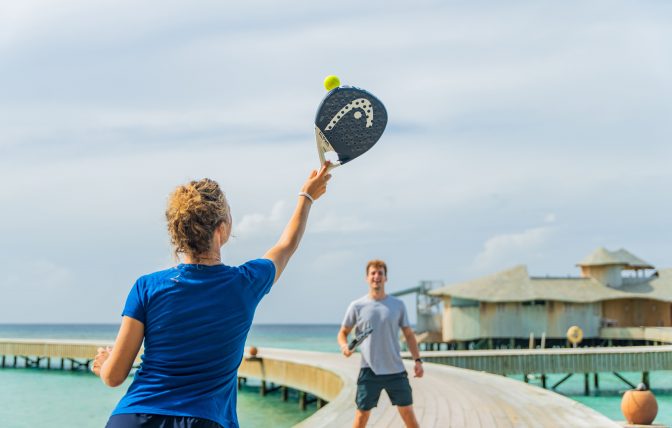 Soneva Adds Padel Tennis to its Unforgettable Experiences in the Maldives

Award-winning luxury resort brand Soneva is introducing padel tennis to its ever-evolving list of unforgettable experiences in the Maldives. The new courts will first be launched at the Noonu Atoll’s Soneva Jani in October, followed shortly after at Soneva Fushi in the Baa Atoll.

Originally invented in 1969 in Mexico by Enrique Corcuera, padel tennis has quickly become one of the world’s fastest-growing racquet sports. It is usually played in doubles on an enclosed court that is around one-third the size of a normal tennis court. Points are scored the same as in a tennis match, using special padel bats as racquets, however, in padel tennis, the height of the ball must be served at or below waist level.

Set against an idyllic backdrop of tropical island surrounds at Soneva Jani and lush jungle at Soneva Fushi, each court will be fully equipped and open to Soneva guests of all ages for both private or group lessons and friendly games.

To launch the new courts Soneva will be bringing a star-studded line-up of professional players through its Soneva Stars programme over the coming months and into the festive season. The current captain of Sweden’s men’s national padel team, Jonas Bjorkman, will be returning to Soneva Fushi from October 28 to November 5, and December 15 to 26, 2022, offering his ever-popular private tennis sessions, as well as padel coaching on the new courts during the Christmas period. The former World No. 4 singles and World No. 1 doubles tennis player is among a small group of players who have managed to win all four Grand Slam events.