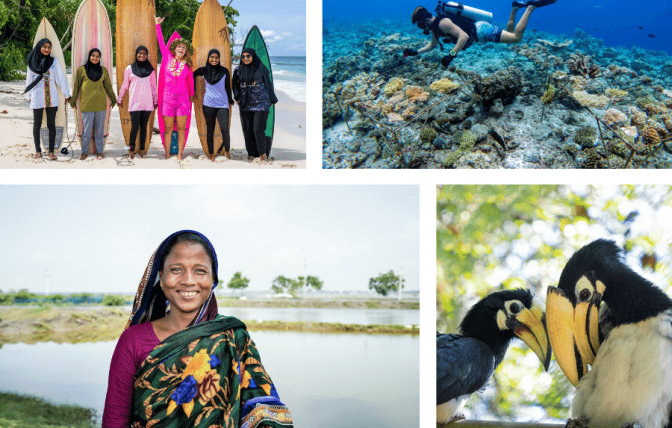 Barefoot luxury pioneer Soneva has announced the publication of its Total Impact Assessment (TIA) for 2021 in its latest Sustainability Report. The award-winning resort brand, which has properties in the Maldives and Thailand, is built on the foundation that a business must exist for a greater purpose than shareholder returns. Soneva recognises that luxury travel and the pursuit of rare experiences can coexist with a deep care for the earth, the environment and its people and continually strives to set the benchmark for responsible tourism.

Soneva first launched its Total Impact Assessment (TIA) back in 2016, to measure its Environmental Profit and Loss (EP&L) and Total Impact Measurement and Management (TIMM). While there is currently no industry standard for environmental and social reporting, Soneva has developed its methodology internally with the intention to improve year-on-year.

Taking a ‘planetary boundaries’ view of its social and environmental impact, the TIA assesses impacts from sources over which Soneva has both direct and indirect control, including natural capital, human capital, socialcapital, economic capital and tax. Carbon neutral since 2012, a mandatory 2% environmental levy is added to every Soneva stay, with proceeds going towards the not-for-profit Soneva Foundation to offset both direct and indirect carbon emissions from resort activities and guest flights.

The Foundation funds a range of global projects that have a positive environmental, social and economic impact, and result in a net absorption of CO2.

• In December, the first phase of the Soneva Coral Propagation Project was completed in partnership with the Swiss environmental organisation Coralive, with 432 table structures ready for coral planting at Soneva Fushi. The project aims to create the world’s largest Mineral Accretion Technology (MAT) coral nursery, propagating 50,000 coral fragments each year.

• In 2021, the Myanmar Stoves Campaign successfully completed eight years in operation. Since its inception, 37,000 stoves have been distributed, benefitting 170,000 people and generating USD 28 million in social value and 240,000 Gold Standard carbon credits.

• The Restaurants Against Hunger project reached its second successful year in 2021. The three-year programme aims to reduce child hunger and malnutrition in Bangladesh.

• The first pair of Oriental Pied Hornbills arrived on Koh Kood in December last year as part of the Soneva Hornbill Project, aiming to reintroduce the species to the Thai island.

• Initiated in 2021, Soneva Forest Restoration Mozambique is a partnership between the Soneva Foundation and Eden Reforestation Projects to plant 3.7 million trees over the next four years in Matica Sede, Mozambique, which will mitigate 2.4 million tons of CO2. Planting commenced in early 2022 and aims to restore 3,378 hectares of forest using native species in central Mozambique.

• In 2021, the Mosquito Project reached a milestone of 2.5 years without pesticide fogging at Soneva Fushi and 1.5 years at Soneva Jani. During this time, the mosquito population has dropped by 98%. The project team also developed a hand sanitiser from a waste stream of the mosquito traps, which was validated by three independent labs in 2021.

• Soneva Namoona expanded from its initial three island partnerships to 11 across the Maldives’ Baa Atoll and Noonu Atoll.

• In December 2021, Soneva Namoona achieved a Maldives’ first: the seven Namoona islands in the Baa Atoll commissioned a recyclable waste collection boat to collect 50 tonnes of segregated, compacted and baled recyclable waste and transport it overseas for recycling.

• Over 101,680 single-use plastic bottles were avoided in 2021 through Soneva Water operations and the provision of alternative packaging.

• 100,191 kilograms of recyclables were diverted from landfill or toxic open burning and delivered to recycling partners in 2021.

• Soneva’s Waste-to-Wealth concept generated USD 427,000 in value in 2021. This brings the total value generated over the last decade to USD 2.6 million.