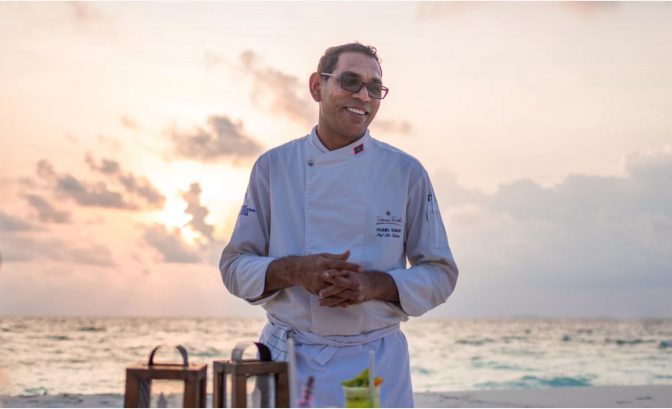 Maldivian born and bred, Chef Sobah is considered one of the pioneers of his islands’ rich culinary heritage. As a child, his family’s main source of income came from fishing, and he would help his parents sun-dry and smoke the daily catch. Today, Chef Sobah cooks for guests at Out of the Blue by Sobah, creating modern Japanese dishes using only the freshest of catches. His original restaurant at Soneva Fushi, Sobah’s, was the first restaurant in the Maldives to offer authentic Maldivian fare with a contemporary twist.

Garlanded with awards spanning his entire culinary career, Chef Sobah is happiest when he’s in the kitchen, whether cooking with his family in his island home or rubbing shoulders at the pass with the world’s Michelin-starred chefs. Of all Sobah’s accolades, he is most proud of the President’s Award, which he won in 2015 for his services to the cooking and tourism industry–a dream come true for this talented Tastemaker.

Currently, Sobah plans on traveling South and North of Maldives, to learn more about new flavors and techniques that can be integrated into his cooking and showcase it to the world.