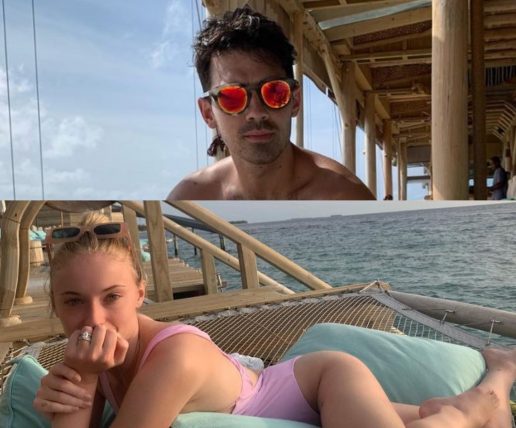 Joe Jonas and Sophie Turner are in Maldives for their honeymoon.

The newly-weds who married for the second time in late June at a Chateau in France, shared an intimate glimpse at their post-wedding getaway on Instagram and revealed that they are currently enjoying their honeymoon at Soneva Fushi in Baa Atoll.

Game of Thrones star, Sophie Turner shared three pictures of Jonas to her own Instagram with the caption, “Paradise, such a magical place”.

The Maldives holds a special place in the pair’s hearts, as they vacationed there, on nearby Coco Privé Island, together in February 2018 celebrating Turner’s 22nd birthday and their engagement.

The couple originally tied the knot in a small festival in Las Vegas after the Billboard Music Awards in May.

Located in Baa Atoll UNESCO Biosphere Reserve, Soneva Fushi is owned and managed by world-leading eco-luxury resort operator Soneva. Over sixty-two private villas with their own stretch of beach are hidden among dense foliage with a spectacular view of the blue sea.