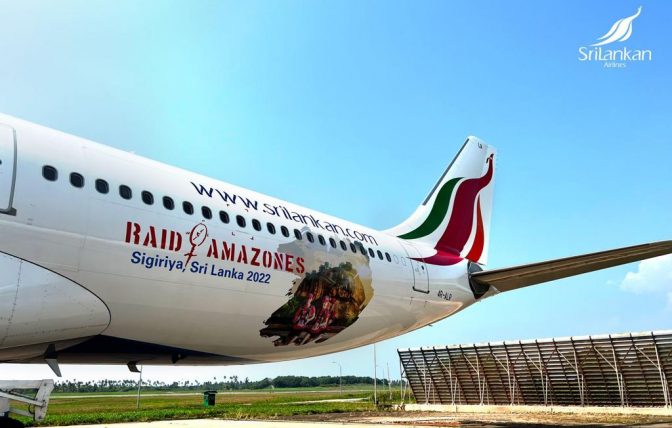 SriLankan Airlines adorns one of its aircraft with customized livery to reaffirm its status as the official airline of the much-awaited ‘Raid Amazones 2022.’

Raid Amazones 2022 is an annual sporting event that features a large number of French female athletes competing their way to victory through multiple sports events and activities against the backdrop of an iconic tourist destination. Every year, the event highlights an attractive tourist destination through inherent features such as its ecological beauty, citizens’ way of life and culture, which are prominently showcased to the world through global media that follow the athletes in their trail.

The 20th edition of the event will take place in the areas surrounding the iconic Sigiriya rock fortress, rich in ecological beauty, cultural heritage and attributes of authentic village life in Sri Lanka. The first leg will take place from 13 – 23, March 2022 and the second leg is scheduled from 27 March – 6 April 2022. Over 550 participants are expected to join the event, including athletes and officials.

The SriLankan aircraft with the special livery features iconic Sigiriya, the vibrant and unique backdrop of this year’s event. This aircraft will be deployed to bring in athletes and officials from Paris to Sri Lanka for the event and would also continue to fly to many of the airline’s other destinations in its scheduled operations, thus portraying Sri Lanka’s stature as a sports and adventure destination.

SriLankan Airlines, a forerunner in the country’s tourism promotion endeavors, expects this to inspire many discerning travellers from France to explore Sri Lanka in the future, supported by the airline’s direct connectivity between the two countries.