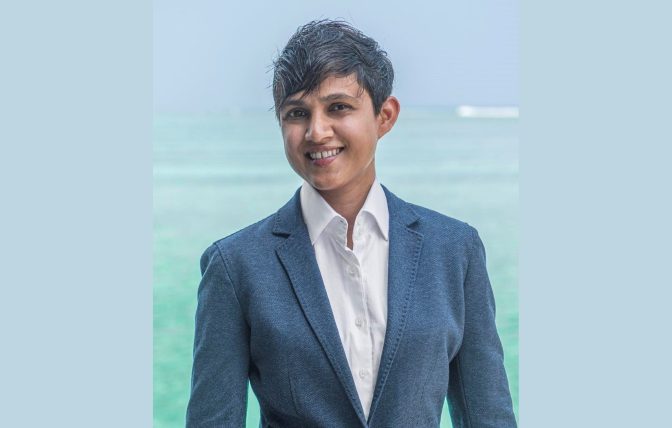 Aminath Nadheema was born and raised in the Maldives by her traditional parents and, being the eldest in the family, grew up to be a robust independent woman. When she started working, she has been very determined to give her best effort and to excel in everything she does. When a career opportunity knocks for her outside the Maldives, she didn’t hesitate to take the offer, and from there, she starts her career adventure. There are hardships and struggles along with her experiences, and being alone in a foreign country was not easy, but that made her stronger and a full transformation into the woman she is today.

After she finished her schooling in 2001, she entered the hospitality industry world in 2003 as a Sales Assistant at Maldives Whale Submarine, and after a year, she moved to Four Season Kuda Hura, where she had worked at various department, including both back and front of the house. Following the various positions that she had, in 2006, she joined W Retreat & Spa, Starwood Hotels and resort (now Marriott International), where she took her first job as a Whatever whenever agent (Welcome Agent). This was the job that made her realized her interest in guest service that eventually becomes her passion for guest service. As she was exceptionally shaped by her guest handling experiences, she climbed up to the Welcome Team Leader role in 2009.  After gaining more than five years of experience in this job, she decided to take the opportunity to move to a pre-opening property at Westin, Doha in 2015 as Westin Experience Specialist (Guest Relations Manager).

For almost three years, she worked abroad, and as her desire to step-up in her career upsurges, she decided to enhance her knowledge through further studies by pursuing Housekeeping Management from Hotel School, The Hague in 2018. This has prepared her for the next adventure, and right after the completion of the course, she gracefully accepted her newfound role as Assistant Housekeeping Manager. Nadhy found fulfilment and true joy while she indulged herself in Housekeeping operations and even devoting herself more to performing and mastering the Housekeeping functions.

With great confidence and a promising future that she can share her wealth of experiences and knowledge with her native country, she finally decided to return home in the same year and accepted the enticing job offer as Assistant Executive Housekeeper at Niyama Private Island, Maldives. Throughout her experience, she has been closely involved in hotel operations and proved herself to shine as Executive Housekeeper after two years, wherein she was recognized as the First Female Maldivian Executive Housekeeper in the Tourism Industry. Since it is very rare to see local women working in the Housekeeping department, we asked her why she has chosen her career path in Housekeeping. Her passionate replied was, “For nearly 15 years, I have been working in various positions in the hospitality industry, and the reason why I decided to change my career path from Front office to Housekeeping was my perception of needing to change the mindset of most of the people around me with regards to specific areas of our industry. To some people, “Housekeeping” was literally interpreted as cleaning floors and surfaces, removing dust and organizing clutter. As for me, it is definitely the base of what I humbly do, and at the same time, it is more than just that.”

Today Nadhy is a hard-working woman who has continued to achieve one target after the other but success does not come easily for sure. Nadhy described one out of such experiences, “Once I was told by one of my superior that I couldn’t do it. Instead of being demotivated and giving up, I took that as a challenge and now I can prove to the world that nothing is impossible if you have courage, commitment, and faith. Always believe in yourself. Keep a positive attitude.”

According to Nadhy, to be successful, you need to be organized, have strong interpersonal skills, and handle stress and pressure at the same time. She advises not to be disappointed if things do not happen exactly like you plan. She talked from her experience, “Some things take time.  You just need to be patient. Life will throw you curveballs, and it is how you deal with those curveballs that allow you to succeed in your life.” She also added, “Throughout my career, I have needed to make tough decisions on what was next for me. You never know which job may lead you to where, so treat each job as a stepping stone to move ahead in your career. Love what you do, work hard with pride and passion.”

Nadhy is not yet done with her dream career, and when she was asked about her next goal, Nadhy disclosed enthusiastically, “Having a Front office background and working in the Housekeeping has shaped me both and take the best out of experience and service. While involved in both departments, handling busy operations within the Rooms Division will help me to achieve my long-term goal, which is to be an Operations/Resort Manager.”

Nadhy concluded with her final message to the youth who are keen on pursuing a career in Hospitality. “Working in Hospitality is fun, where you learn how to live and meet thousands of people from all over the world. The hospitality industry allows you to develop yourself professionally and as a person. Always stay focused, and it is a great eye-opener to make sure that you love what you do.”

There are very few women in the Maldives who are this determined to succeed in their career and work towards their goal with pure passion like Nadhy, and therefore we wish her the very best and look forward to Nadhy reaching her ultimate goal someday.