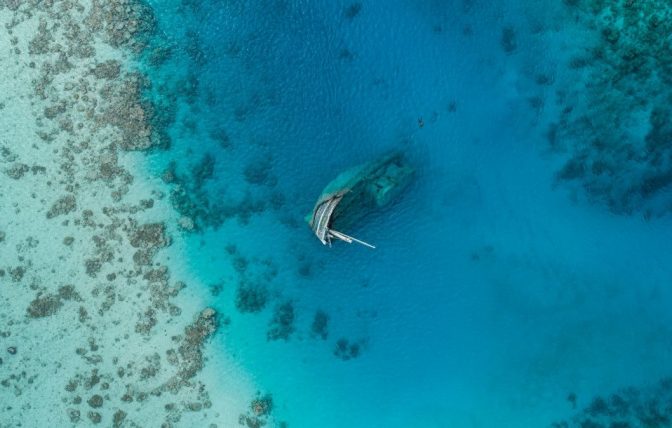 Maldives is home for the world best diving spots, which includes sunken shipwrecks. In the recent years these sunken shipwrecks has become a famous tourist attractions, especially among the divers.

Wreck diving, for many, is the ultimate experience. Some of the most spectacular shipwrecks lie on the ocean floor of this tropical diving paradise. Divers can get to witness how marine ecosystems adapt to take over these sunken relics, and explore the sunken treasures beneath the deep blue sea.

Here we have compiled a list of some of the top shipwreck diving spots in Maldives.

The Victory wreck is a cargo ship that lies on the southwestern side of Hulhulé. The Victory Wreck is an 80m/262ft-long cargo ship that sank in 1981 in North Malé Atoll in the Maldives. It sank while on its way from Singapore carrying goods for the resorts on the islands. Usually divers start and finish their dive set at main mast. On the way back divers can look down and enjoy the entire panorama of the wreck.

Rannamari Wreck is a sand dredger that was brought to Maldives from Singapore for the Male‟ Reclamation Project‟ in 1982. It had been the third dredger brought into the country and was used in several projects in the capital Male and Thilafushi island (manmade island west of Male‟) and was in working condition until 1999.

In 1999 the sand dredger was sunken to the house reef at Angsana Ihuru. Since then the wreck has been naemed as the  Rannamari Wreck .The wreck is now home for thousands of marine creatures. Outside of the wreck you could see schools of Jack and fusilier while friendlier groupers and batfish hang around the hull. Inside the engine room bay glassfish , big eye and squirrelfish and giant moray eels spend their days. There are numerous scorpion fish and stingrays at the bottom of the wreck. The Rannamaari Wreck’s new crew now seeds the ocean with plankton. Its transformation from wreck to reef has taken little more than one year and it will support marine life for many years.

Sunken ship near Keyodhoo island in vaavu atoll is the most iconic ship wreck in the Maldives. It is thought to be an Indonesian vessel that drifted empty into the atoll a years ago. Since then, it has become a tourst attraction in Vaavu atoll. It is one of the most popular and most “Instagram worthy” spot to visit in Maldives.

Kudhimaa Wreck is a medium sized steel wreck lying close to the Machafushi house reef. The wreck was purposely sunk to provide divers visiting the South Ari Atoll with a wreck. On and around it, you can find schools of bat fish, some puffer fish and the customary large lionfish. It is bursting with subjects for photographers.

The Shipyard is one of the biggest dive attractions in Lhaviyani Atoll. There are two wrecks in this location which are 40 years old. While one of them sits upright, the other is on its side at about 30 meters below the water. They are home to a variety of fish and also a hangout for large pelagics, nurse sharks and grey reef sharks. This is another must-visit spot to add to your list.

The Shipyard offers the unique opportunity to snorkel around a wreck lying against the reef with its bow breaking the surface, and with the right conditions and good visibility you can also see a second wreck lying on the bottom close by. The wreck is covered in colourful corals and sponges and attract a large variety of reef life. There are colourful antheas, gobies, angel fish, curious bat fish, and much more. Stingrays and napoleon wrasse can also be seen passing by.