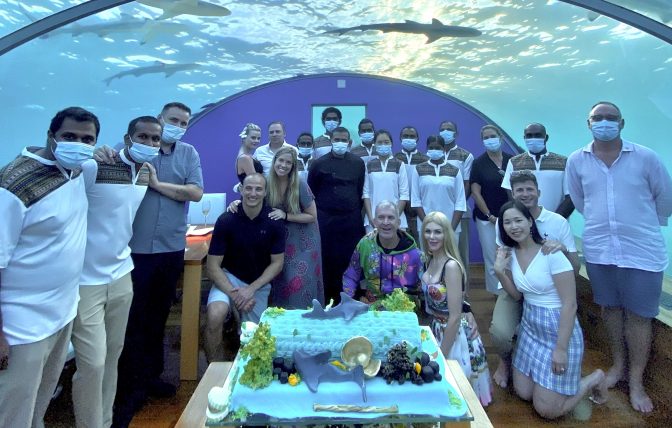 The first Undersea Restaurant in the World Celebrates its 16th Anniversary

Ithaa at Conrad Maldives Rangali Island celebrated its 16th anniversary with a special lunch and dinner menu for guests on 15th April 2021. Highlighting the celebration was a cake cutting ceremony attended by guests and team members that have witnessed the inauguration of the world’s first undersea restaurant 16 years ago.

In 2005, Ithaa was spectacularly ‘sunk’ five metres beneath the waters of the Indian Ocean and has ever since been the mecca for lovers of food, culture and architecture all over the world. Sitting like a pearl beneath the waves, (Ithaa translates as ‘mother of pearl’ in the Maldivian language of Dhivehi) the curved acrylic walls that give 180-degree panoramic views set the trend for unique dining.

It became the world’s first aquarium-style undersea restaurant – indulging diners with stunning views of the surrounding lagoon, reefs and tropical fish. Consistently recognised as the most beautiful restaurant in the world, Ithaa is fast becoming a 21st Century travel icon. Travellers from all over the world has Ithaa on their bucket list, a must visit when vacationing in the Maldives.

Conrad Maldives Rangali Island is a 25min short seaplane ride away from Male’s Velana International Airport. This beautiful twin-island resort is situated in the midst of the Maldives’ best diving and snorkelling spots, made famous for its Whale Shark tours. Nestled in a unique atoll surrounded by azure blue water, powdery white sand and an incredible diversity of marine life.