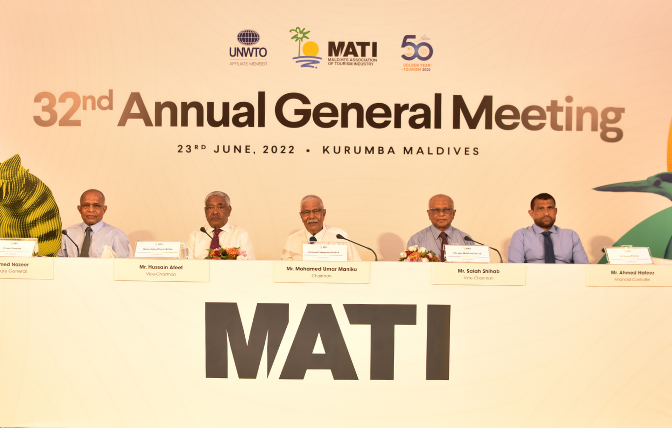 The Maldives Association of Tourism Industry (MATI) held its 32nd Annual General Meeting at Kurumba Maldives on Thursday. A total of 96 members participated in this year’s AGM. This year’s AGM was also attended by the Minister of Tourism Dr. Abdulla Mausoom, Minister of Environment, Climate Change and Technology Hon. Aminath Shauna and the Chief Executive Officer and Managing Director of the Maldives Marketing and Public Relations Corporation Mr. Thoyyib Mohamed who delivered remarks and participated in a Member Q&A session as well.

The Chairman of MATI, Mr. Mohamed Umar Maniku initiated the AGM by delivering the official opening remarks, followed by a statement from the Secretary General of MATI, Mr. Ahmed Nazeer.

Mr. Ahmed Nazeer oversaw the official proceedings of the AGM. The proceedings included the Passing of Minutes of the 31st AGM and adoption of minutes, a video presentation which highlighted work done by MATI for the year 2021, the presentation of the annual report and Financial Reports for 2021, adoption of the budget for 2022 and the Appointment of Auditors for 2022. Furthermore, the board members for the year 2022-2023 were elected.

In light of this year being the Golden Jubilee of Tourism, MATI also showcased a video detailing the celebratory activities organised by MATI for the year. They included the Chevening / Maldives Association of Tourism Industry (MATI) Scholarships partnership, release of 2 coffee table books titled – “Maldivian Resort Architecture – 50 years of island resorts” authored by Mr. Mauroof Jameel and “50 years of Tourism in Maldives – the Pioneers, People and Policies that shaped the Industry” authored by Dr. Simad Saeed set to be released during the Gala Dinner held on the 40th Anniversary of MATI on the 12th of August 2022 and a partnership with Parley Maldives tackling plastic pollution and promoting environmental conservation.

The following were elected to the Executive Board of MATI for the year 2022-2023.