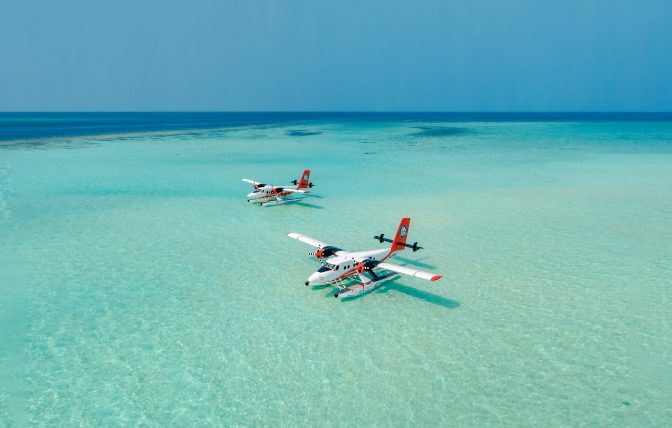 Trans Maldivian Airways (TMA) has welcomed its milestone 60th aircraft to its fleet. The De Havilland DHC-6  Twin Otter touched down at Velana International Airport on Wednesday, 16th November 2022,  journeying all the way from Canada.

The airline is expected to extend its services to a million passengers by the end of this year, and is looking forward to maintaining and further improving its service standards, whilst fostering trust and confidence among its guests who rely on them to be their Gateway to Paradise! With an exciting year ahead for Maldives Tourism and a number of new properties coming up, TMA remains committed to continuously evolving and growing alongside its partners and the industry.

This year has been a year of great milestones for the World’s Largest Seaplane Operator. After 30 years of operating seaplanes from its own base, TMA made a historic relocation to Noovilu Seaplane Terminal (NSPT).  This was a necessary step for the expansion of seaplane operations, as the new terminal holds twice as many seaplanes as TMA’s old seaplane base.

Trans Maldivian Airways has been honored with multiple accolades for its accomplishments this year, starting with the South Asian Travel Awards naming the company as the “Leading Tourist Transport Provide (Air)”.  TMA was also awarded the title of “Seaplane Company – Regional Winner” at the World Luxury Awards 2022.  TMA also once again defended its title as the “Indian Ocean’s Leading Seaplane Operator” for the 9th consecutive year, whilst also winning the prestigious title of “World’s Leading Seaplane Operator” for the 8th year at the World Travel Awards 2022.

Since the introduction of seaplane services to the Maldives in 1993, TMA has pioneered point-to-point connectivity in the country and has given the tourism industry the confidence to expand to the outer atolls.  The government of Maldives acknowledged and recognized Trans Maldivian for its exemplary contributions to the tourism industry’s expansion over the last 50 years, with the company receiving the President’s Tourism  Gold Award at the Gala held to celebrate the Golden Year of Tourism in the Maldives. Further, TMA’s CEO Mr. A.U.M. Fawzy received the Appreciation Award from the Ministry of Tourism for his contributions to the Maldivian Tourism Industry, presented by His Excellency Mr. Ibrahim Mohamed Solih at the 50 Years of Tourism Appreciation Reception.

As the oldest and most experienced transport provider in the Maldives, TMA has been the preferred way to connect guests from Velana International Airport to over 80 resorts across 14 atolls. From its humble beginnings with 2 aircraft and 4 passengers, now the World’s Largest Seaplane Operator with a fleet of 60  aircraft, TMA has grown to become one of the largest companies in the Maldives, a key contributor to tourism infrastructure and the backbone of the industry in the country.