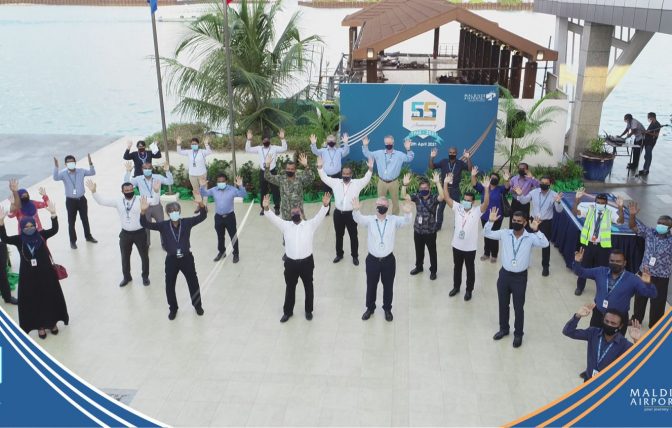 Maldives Airports Company Ltd (MACL) celebrates Velana International Airport’s (VIA) 55th anniversary, today. To mark the occasion a flag hoisting ceremony was held at 0600 hours at VIA. The Ceremony was graced by the Minister of Tourism Mr. Abdulla Mausoom with MACL’s Chief Executive Officer and Managing Director Mr. Gordon Andrew Stewart. The Ceremony was joined by MACL senior management team and airport stakeholders.

Addressing at the event, MACL CEO and MD Mr. Gordon congratulated the employees on the occasion and recognized the staff commending their hard work and dedication last year during the COVID-19 pandemic. CEO and MD Mr. Gordon said, “I am honestly really very proud of the job each and every one of you has carried out for MACL and our Airport. I have been really impressed with how quickly we have been able to act and how well our airport recovery plan was executed. You all did exceptionally well and showcased our Airport as one of the safest airports in the world and I am really proud of you all for what we have achieved together.”

Speaking about the future of the Airport, Mr. Gordon stated “This year alone we plan to complete the world’s biggest Seaplane Terminal, a modern VIP/CIP Terminal, new Aprons, new Runway, new Cargo Terminal and early next year a new Fuel Farm. All these will dramatically improve the services offered to our customers and I am excited for our airline partners and stakeholders for the world class services they will soon receive. Apart from this, we are working on speeding up progress, which was affected by COVID and targeting an official handover during the third quarter of this year.”

Conversing at the event Honorable Minister of Tourism Abdulla Mausoom said, “I am glad and proud that during the pandemic the airport operation continued smoothly. This shows the dedication of the airport staff and stakeholders. Over the past years VIA has improved tremendously with its services in terms of handling capacity and infrastructure. The Minister also thanked President Ibrahim Mohamed Solih for the drive to boost the Tourism Industry of the Maldives.

Today’s ceremony was concluded with a special prayer along with a ceremonial cake cut. VIA was opened by former President of the Maldives Mr. Ibrahim Nasir on April 12, 1966.