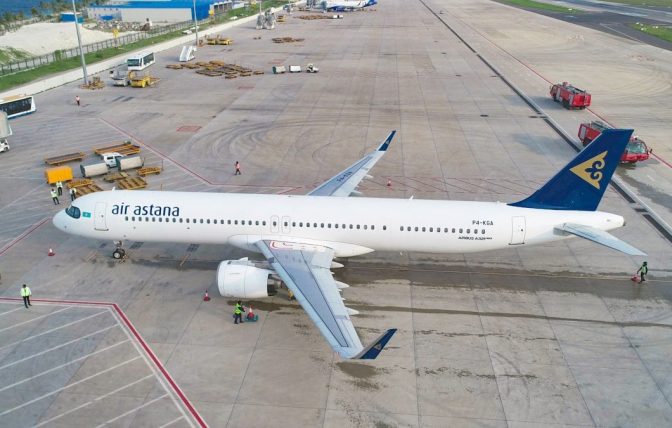 Visit Maldives hosted a webinar with Air Astana on Friday, coinciding with the start of Kazakhstan’s flag carrier’s flights to Maldives. The direct flights which have started from 5th December is a stepping stone towards establishing a connection between the 2 destinations and working towards improving flight connectivity between Maldives and the rest of the world.

The webinar was joined by over 150 travel agents in Kazakhstan where the latest information about the destination and the arrival and departure procedures in the new normal were highlighted. The airline also showcased the various inflight services available through the airline for travellers. This activity is among the several activities that are being carried out in the Russia & CIS region. Last month, a TV crew from MUZ TV Channel of Russia arrived to showcase Maldives as the most ideal holiday destination for Russian solo travelers in the travel show, “Independent Traveler.” During their week long trip, celebrity TV Host Andrey Razygraev led the crew whilst enjoying various activities offered by the host properties, under the “new normal.” These properties are Centara Ras Fushi and Radisson Blu.

The 45-minute show is expected to be broadcasted in December with a special premier and 3 repeat programs. This is the third season of the successful show and is expected to reach a large audience during the TV broadcasts. The episode will also be uploaded on their YouTube channel with 1.3 million subscribers.

The Russain market is a traditionally strong market to the Maldives and is performing exceptionally since the reopening of the borders on the 15th of July. Presently, Russia is leading the arrivals among the top arrival markets to the Maldives.

Visit Maldives is conducting several marketing campaigns for the Russian market such as the E-Learning Platform, Online Travel Market (OTM) with Profi Travel, combined campaign with Travelata, Sletat.ru and Squizz and a special media project with Aeroflot inflight magazine targeting affluent consumers and frequent travelers. To enhance Maldives visibility, TV advertising has also been carried out with 360° TV of Russia during September and October this year. Two webinars with Profi Travel on their Online Travel Market platform have also been carried out during November and December, highlighting the latest destination updates. These webinars have been attended by over 800 agents from the region. Additionally, under the ongoing global media campaign, Vogue Russia and National Geographic will also feature the destination in the publications. An editor from MyWay magazine in Russia is also set to visit Maldives, to write about the destination in the publication.

With the several initiatives to market the destination in Russia & CIS region, the arrivals from Russian market is seeing a positive growth. The resumption of Russia’s national carrier and largest airline, Aeroflot, in September has also contributed in regaining the travelers confidence and portraying the destination as a safe haven. Aeroflot has since increased its frequency to the destination and several airlines such as Rossiya and Azur Air from the region have resumed flights to the Maldives, increasing the connectivity to the destination.