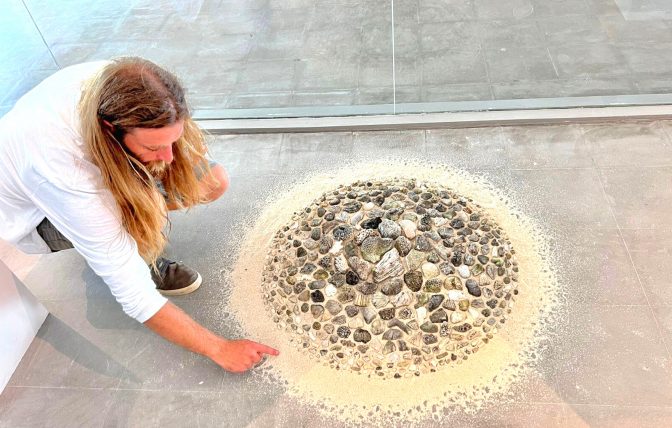 It’s Freedom Time and Welsh sculptor, Jon Foreman, recently embraced his freedom by creating incredibly aesthetic and sustainable pieces of Land Art at Cora Cora Maldives, the very first resort in the destination to display natural Land Art. Originally inspired by the Pembrokeshire Coastline, Jon Foreman creates temporary Land Art from materials such as broken glass, leaves, stones, or ashes to escape the stresses of everyday life. His two installations at the five-star resort perfectly emulate the “freedom ethos” present across the island and show guests how wonderful the outcome could be should humans and nature collaborate in harmony. By exploring the Maldives as a destination, Jon was able to experiment with new materials, learn to work in a new environment and climate, and meet incredible new people, all of which inspires him when creating Land Art.

The two installations at Cora Cora Maldives are a true homage to the natural beauty of the destination and are the only works of Jon Foreman’s that can be enjoyed for a long time before being reclaimed by nature. The first piece named ‘Semitae Libertas’ was created using large pieces of coral Jon found along the shoreline and on the beaches at Cora Cora Maldives. The sand beneath the sculpture is powder-soft and dazzlingly white. The second circular piece, titled ‘Libertas Insula’ is made entirely of coral and shells collected from the nearby “Tsunami Ghost Island” on Kandolhudhoo. The “paths” between the pieces of coral all lead to freedom, freedom every guest finds at Cora Cora Maldives. This exceptional piece not only honours the rich and tragic history of the destination, but also symbolises new beginnings and the exciting prospect of finding freedom at Cora Cora Maldives.

Jon Foreman has created and displayed his artwork at festivals spanning continents, from the Big Retreat Festival Pembrokeshire 2018 to Busan’s Sea Art Festival South Korea 2015, to Llano Earth Art Festival (LEAF) Texas 2020. Jon’s expertise lies in creating a “different” artistic experience. The scale of his work varies greatly depending on his inspiration, for example, he may use stones and driftwood to create something small or he may design a sand drawing 100 metres wide. Often his work is short-lasting, whether that is due to human disturbance or the climate but the emotional impact on his audience is long-lasting.

Jon Foreman began his creative path to Land Art whilst at college and has found that it doubles as the perfect career, as well as a form of therapy. Due to the ephemeral nature of his work, Jon usually does no finalise the details of his next artwork until the day before when he is certain of the weather forecast and tide predictions. The process also varies from time to time. Sometimes he does have an idea he is trying to work with, but he will always allow the process to guide him, meaning the idea is never set in stone. Other times he arrives at the environment with no idea at all and tries to adjust according to that specific environment or takes influence form past works. A huge part of his artistic journey has been based on collaborations, not just with other artists but with nature itself. He believes that art is not restricted to just drawing, instead, beauty can be found in the most unlikely of places. He revels in experimenting with materials and has found that changing the way an object is arranged or how the material is manipulated completely changes the effect the artwork has on his audience.

Always one to innovate and never imitate, Cora Cora Maldives is constantly finding new ways to amaze and delight its guests. One installation of the Land Art blends in seamlessly with the stunning natural surroundings at the base of their brand-new Star Gazing Tower whilst the other is in the Dutch OnionÒ Art Gallery-Museum, the very first licensed museum to be opened on a resort in the destination.

Jon Foreman has written a book about the wonders of Land Art and documents his journey to finding this incredible creative outlet with the help of fellow artists. In line with the fluid nature of his sculptures, the book will embrace the idea of expressing freedom through art and the incredible impact that nature can have on humans.