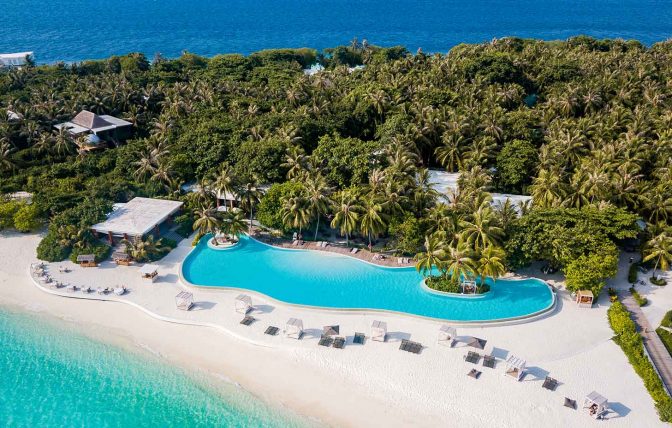 Amilla Maldives Resort and Residences is renowned for its spectacular events and its newly-released Festive Season schedule suggests it will live up to its reputation this year too. From the build-up to Christmas Day and New Year’s Eve, right through to Orthodox Christmas, the Baa Atoll private island resort will be sizzling with live entertainment.

Amilla will be welcoming back the Area 51 Performers, a troupe of highly-skilled entertainers, who will surprise and delight guests of all ages with performances and workshops from December 22nd right through to January 7th.

It all kicks off with ‘What the Dickens! An Island Christmas Carol Cabaret’ on Christmas Eve. Amilla’s youngest guests will participate in a show based upon the theme of ‘the Past, Present and Future of Sustainable Fashion’. This will be followed by a delicious Christmas Eve Gala Dinner with traditional fare. The Maldivian group, Limestone Band, will set the soundtrack to the festivities with their signature upbeat rock and dance music.

Christmas day will see a long lazy Christmas brunch followed by Santa arriving Island style to distribute gifts. The entertainment will continue as Amilla gears up for New Year’s Eve. A talent show on December 30th will give kids the chance to show off their skills, with help from the Area 51 Performers.

This period would not be the same for Amilla’s Russian guests without a visit from Ded Moroz (‘Grandfather Frost’) who will arrive on New Year’s Eve with his granddaughter, the Snow Maiden, to distribute gifts to the children. It will be a wonderful opportunity for children of all nationalities to learn about another culture.

The New Year’s Eve celebrations will be an island-wide extravaganza. Amilla is thrilled to announce it will be welcoming back DJ Scotts Mills, from BBC Radio One. He will be supported by Limestone Band on the main stage. The ‘Out of the Blue’ themed party will whisk guests away to a Venetian underwater world with mythical creatures, opera, violins and much more.

Then Orthodox Christmas Eve will see a fresh twist on a traditional tale, ‘The Song of Babushka’. Amilla’s Kids’ Club team will lead children through an active retelling of the fable, leading up to a Gala Dinner fit for a Tsar, with performances representing gold, frankincense and myrrh.

Another headline act, Dima Bilan, of Eurovision fame, will be joining the party on Orthodox Christmas Eve (January 6th). After a performance from Limestone band, he will rock the main stage with his hit songs right into the night, accompanied by Amilla’s in-house performers. Dima will perform a follow-up show on January 13th as well.

With so much action, Amilla will be the centre of festive fun this year and into 2022 and the resort’s Villas and Residences are filling up fast for this period.