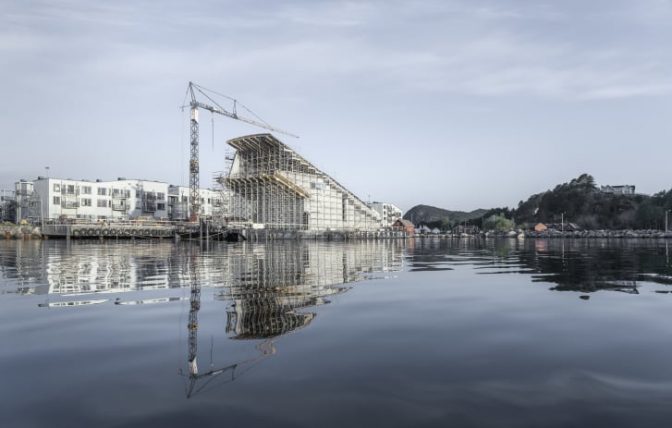 Located five meters below the surface of the North Sea, near the southernmost tip of Norway, the restaurant was submerged in July 2018 and works are now underway to complete the interior of the structure. The restaurant is expected to accommodate about 100 guests with a total internal area of about 500 square meters set over three levels, offering unique underwater views of the surrounding marine environment through a 11-meter wide panoramic window.

The restaurant, called Under, is the design of Norwegian outfit Snøhetta, which has made a name for itself with projects such as the Bibliotheca Alexandrina in Egypt, the Oslo Opera House, the National September 11 Memorial Pavilion and the renovation of Times Square in New York.

The restaurant was built in about six months on a barge near the coast, then towed into position — about 600 feet away — with a heavy-lift vessel. To submerge the structure, containers filled with water were placed inside, before securing it to the sea floor with a total of 18 anchoring points. “It was a delicate operation, as the clearance to meet the bolts was just two inches,” Rune Grasdal, a senior architect at Snøhetta, stated. 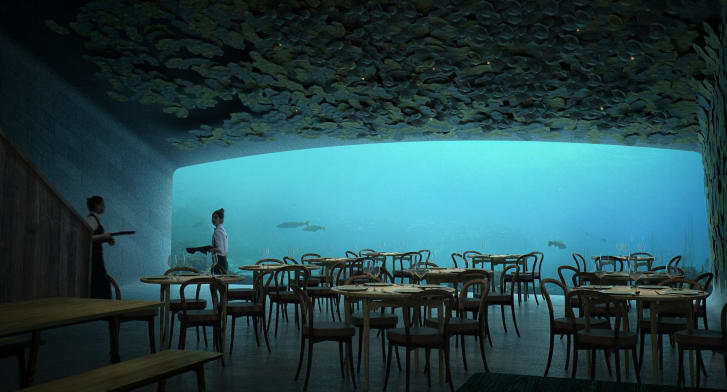 An artist’s impression of the dining area. Credits: Snohetta

The building slightly curved to withstand the waves and it’s thick: half a meter (1.6 feet) for the concrete and about 30 centimeters (1 foot) for the acrylic windows. To guarantee the safety of the guests, an analysis has been performed to study the propagation and load of the waves, and the 2,500-ton structure is designed to withstand the most extreme events. The data will also be fed back to visiting research teams that study marine biology and fish behavior. Work has been done to restore the conditions that were in place prior to the disturbance created by submerging the structure, and the concrete shell is designed to invite mussels to cling onto it and blend into the surrounding nature.

Developers Gaute and Stig Ubostad, also operates a hotel a short distance from the restaurant. They both sit in the Lindesnes region, home to Norway’s oldest lighthouse, a popular tourist attraction located at the southernmost tip of of the mainland.