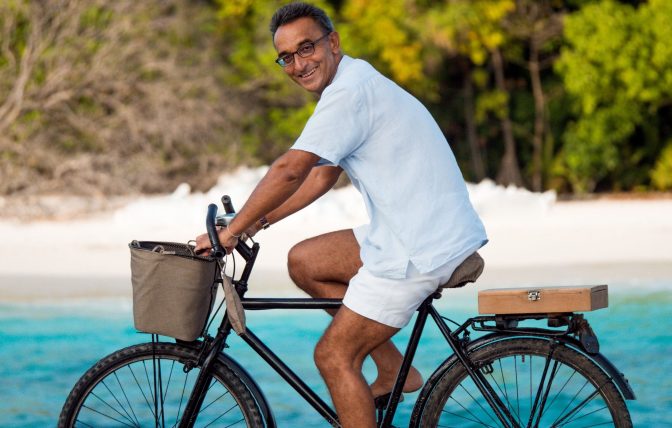 Some Important Truths About COVID-19 By Sonu Shivdasani

With Austria in lockdown, the Netherlands in partial lockdown and noises from Denmark and other countries hinting about a new lockdown or restrictions on life, there is the risk that much of Europe will not have a merry Christmas. As we hit the second anniversary of COVID, our quality of life is still severely affected by this virus. Lockdowns and restrictions are not the solution. There is a way forward. Let me share with you our experience of COVID and explain:

My wife Eva and I opened Soneva Fushi, which has been our base during the pandemic, in 1995. We have dedicated our career to luxury hospitality and wellness. At present, our business interests are focused entirely on the Soneva brand with hotels in the Maldives (we opened Soneva Fushi’s sister, Soneva Jani, in 2016) and Soneva Kiri in Thailand. We understand that our hosts are our biggest asset at Soneva. So, there was never a question of closing our resorts and sending our hosts away. At Soneva Fushi as an example, even whilst the Maldives borders were closed, we continued to operate with seventy guests in-house, who spent the lockdown with us. It was a surreal time when the rest of the world was in lockdown and masks were obligatory, because there were no arrivals on the island, we were without masks and life was normal.

Eva and I wanted to preserve this wonderful experience even when the borders reopened and we started to receive new guests. So, we invested in a state-of-the-art COVID testing laboratory and decided to test all our guests and hosts on arrival. Our hosts were asked to isolate for a week until a second test, whereas our guests had total access to the island a few hours after a negative test. So, at Soneva, we were not just ‘No News, No Shoes’, but also, ‘No Masks’. We created a nirvana for our guests.

However, over the past 18 months, since the Maldives borders reopened in the summer of 2020, we have experienced 500 positive Covid cases in the Maldives. We have managed two community spreads, one at each of our Maldivian resorts. In each case, over 100 hosts were positive. This number also includes construction workers who were temporarily on our resorts working on upgrade projects. Many of these cases took place last year and early this year before the vaccine, approximately half of these cases were unvaccinated people.

We have been blessed with no fatalities. We only had one hospitalization — for a couple of hours to double-check an individual’s breathing. In most other cases, the individuals have moved from positive to negative in a matter of 4 – 5 days. 99% of these cases have been negative within 8 days. Our success is the result of how we have treated these cases. I will explain more later.

I share below some truths that we have discovered.

Our experience with a recent community spread was that in spite of daily testing and isolation, within 14 days, 20% of our population became positive. It is clear as I write this and glance at the COVID statistics offered by Worldometer, that the number of COVID cases have been grossly under-reported. According to Worldometer, the U.S. had only had 51 million cases out of a population of 400 million people. It is impossible to believe that India with a population of 1.4 billion, has only had 34 million cases. In fact, an article published back in January highlighted that 50% of Delhi’s population had COVID antibodies.

The Guardian newspaper in July highlighted that COVID antibodies were detected in 67% of the Indian population in general. In the 45-60 year-old age group, 77% of the population had antibodies. If the number of cases have been grossly underreported, then the virus is clearly less virulent and less deadly than the statistics suggest.

There is also the chance that the population of some parts of India have already reached herd immunity. Whilst the number of daily cases is probably still underreported in India, they have clearly dropped substantially since the summer’s peak when there were 400,000 cases a day. The reported daily cases now are less than 10,000. Vaccinating a population as large as India’s has been difficult. So, one might attribute the dramatic drop in cases to a level of herd immunity rather than the effect of the vaccine.

Our experience in dealing with community spread has taught us that without extensive daily testing, it is impossible to control the spread of the virus. It would be like trying to control a forest fire without the use of water or extinguishing agents. Daily testing when there is community spread is the only solution.

The vaccine certainly reduces severe illness but it does not stop the spread of COVID. We experienced community spread at our resort even with a vaccination rate at 96%. Our hosts had either the Sinopharm or Covishield (the Indian version of the Oxford AstraZeneca vaccine).

In Britain at the moment, the daily cases have reached 100,000 — considerably higher than the last peak which of 67,000. However, the number of daily deaths as a proportion of new cases is just 5% of what it was during the previous peak in cases, at the start of this year. The death rate compared with new cases is 0.16% which is considerably lower than the historic average of the United Kingdom at about 1.3%. In other words, the vaccine has reduced the death rate by 10 times.

The focus of the medical establishment in combatting COVID has been on creating vaccines. The general view is that treating viruses are difficult. That said, there have been some successes in reducing the severity of cases with drugs such as Dexamethasone and the anti parasite medication, ivermectin.

Recently Merck, a pharmaceutical company, released results of an oral antiviral drug to treat COVID-19, called Molnupiravir. It reduced the risk of hospitalization and death by 30% in people with mild or moderate COVID-19, who were at high risk of severe COVID.

A recent press release by Pfizer also confirmed results showing that its oral antiviral treatment, Paxlovid, significantly reduced the risk of COVID related hospitalization and death. According to a recent article by the Harvard Medical School: “by 28 days after treatment, those who had taken Paxlovid, within 5 days of the start of symptoms, had an 88% reduced risk compared to Placebo. Side effects of Paxlovid and Placebo were comparable and generally mild.”

Whilst these new discoveries are encouraging, our own experience is that there is an extremely powerful natural herb that has been very successful in reducing the severity of the illness. I explained above that about 50% of the 500 positive cases that we experienced at our resorts in the Maldives were unvaccinated. They still recovered in a similar amount of time. The key ingredient that we fed them was an extract from a South Asian plant that is well known and used extensively as an antiviral in Indian Ayurveda. It is called Andrographis paniculata. Our experience has been incredible. As soon as we have a positive case, the first thing we do is offer the individual Andrographis paniculata three times a day. On average our positive cases have moved from positive to negative within a matter of 4 to 5 days. 99% of all cases have become negative within 8 days. We consider it a miracle herb both as a prevention against COVID, as well as a cure.

In fact, Thailand has approved Andrographis paniculata to treat COVID-19. The Thai Corrections Department gave this herbal remedy to 11,800 inmates with mild symptoms of upper respiratory infections and now claims that 99% of them have recovered, prompting the Higher Education of Science and Research and Innovation to recommend that asymptomatic patients take 180 milligrams of chiretta (a traditional Thai medicine largely comprising Andrographis paniculata) per day divided into 3 doses at meal times. In another example, 30 COVID-19 patients in a prison were given Andrographis paniculata. They were tested every 2 days and after 8 days, no COVID was found.

The focus and success of Andrographis paniculata is not just in Thailand. It has been successful in India as an antiviral. It is also a standard remedy in China against viral infections and has been used extensively against COVID. Furthermore, the U.S. National Center for Biotechnology Information in April produced research showing Andrographis paniculata to be very effective in combatting Covid.

There are hopes that Omicron may be a blessing. Early findings suggest that Omicron might be much less severe than the Delta variant. I quote below from Dr Devasena Radha Krishnan, a Professor in Microbiology from Madras Medical College:

“Omicron is a combination of alpha, beta, gamma delta variants of Corona, mutated… Omicron is a blessing in disguise variant that causes mild infections like the common cold with rapid spread and is an indication for the End of the Pandemic… A welcome change that could replace our dangerous delta variant. A pandemic ends after a series of mutations cause herd immunity, and weakens the virus severity… We have reached that change.”

In Great Britain, in contrast to the Government’s panic around Omicron, recent statistics are encouraging and are a strong ray of hope that this could be the end of the pandemic. In the country, despite the rising number of cases, the rate of hospitalization is lower than its average just before the discovery of Omicron. According to one report, in three and a half weeks, there have been 12,000 cases of Omicron per day but only 12 deaths. This comes to a death rate of 0.045% for the entire spectrum of the British population. Not much difference to the death rate when we have experienced strong winter flus. These statistics support Dr. Radhakrishnan’s theory.

Even to date with the stronger more virulent variants, the death rate has been very low. If one is under 49 and in good health, the risk of death is 0.1%. In other words, one has a 99.9% chance of survival. Up to 65, the chance of survival is still at least around 99.6%.

I was recently told a story of a terrible tragedy of the way we have tried to battle COVID. Last year, in a particular university in the UK, which was closed because of the British lockdown, whilst the risk of fatality from COVID for those under 30 is 0.01%, three out of the thousand students in a particular year committed suicide as a result of the psychological pressure created by the lockdown. So, our response to COVID rather than the virus had a greater death toll amongst this group.

Variants are becoming less effective and for a majority of the population, the risk of severe illness or fatality is low. There is also strong evidence of real cures to reduce the severity and the impact of COVID. Given the large costs and infrastructure required to vaccinate and give boosters to large populations, the significant human cost — both economic, physical and psychological — caused by lockdowns and other restrictions; for the majority of the population, it must now be time to reduce restrictions, stop lockdowns, and live with COVID.